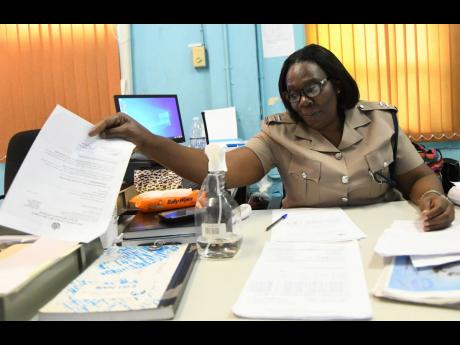 Near-four-decade veteran District Con­stable Morris Walker was scheduled to proceed on retirement on June 29 but won’t get an opportunity to bask in the fruits of his labour.

It was a sombre mood at the Cross Roads Police Station in Kingston on Tuesday following his sudden death the previous day.

Walker, 62, served in the Jamaica Constabulary Force for 35 years, giving all his years of service at the aforementioned station.

Inspector Hopelyn Henry remembered the late cop as an employee with an outstanding work ethic, often going beyond the call of duty.

On Monday, Walker had complained about a pain in his leg while at work and Henry recommended that he elevate it to reduce the swelling.

“But he would have none of it, so he continued to work until 6 o’clock in the evening – the end of his shift,” Henry told The Gleaner.

Walker was later found unresponsive in his barrack room and later pronounced dead at the Kingston Public Hospital.

Henry declared that policing was stressful but said she was unaware if Walker was contending with additional pressure at work or otherwise.

DaCosta was assigned to detention and courts in the St James Police Division.

President of the District Constables Association, Damion Pryce told The Gleaner that DaCosta had complained about chest pains after completing her duties at the Montego Bay Police Station early Sunday and was admitted to hospital.

Henry said that Walker’s willingness to fight through pain was testament to his commitment to policing.

“He would continue to work, and if his supervisor recognised that something was wrong and asked him to remain at the station, he would say, ‘No, man, mi all right’,” she recalled, adding that Walker suffered from diabetes.

“It’s a sad passing. We have lost a good worker and a very good person. He was very jovial and would always find something to say to break the ice,” Carnegie told The Gleaner.

“He did every task, even if he was experiencing pain. You would never know until you hear him groaning.”

The late district constable leaves behind a widow and several children.

“He is always at work. He gets here 4 o’clock every morning, no matter what time his shift starts,” he said.

A total of 45 cops died last year from lifestyle diseases, according data compiled by the Jamaica Police Federation, which represents members of the Jamaica Constabulary Force up to the rank of inspector.