Riots: The language of the unheard – must end now 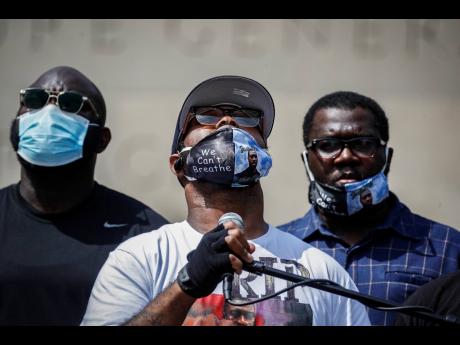 John Minchillo
The brother of George Floyd, Terrence Floyd, speaks to a crowd during a rally at Cadman Plaza Park, on Thursday, June 4, 2020, in the Brooklyn borough of New York. Floyd, an African American man, died on May 25 after a white Minneapolis police officer pressed a knee into his neck for several minutes even after he stopped moving and pleading for air.

THE MURDERS of George Floyd, Breonna Taylor and Ahmaud Arbery are visceral in our collective consciousness. All three murders were completely unnecessary, and vividly demonstrate that all men are not created equal under American law and the American Constitution.

The 13th Amendment, drafted in 1865, which was supposed to abolish slavery, clearly created a loophole for continued slavery through incarceration summarily and this reads: “Slavery shall not exist in the United States … except as punishment for a crime whereof the party has been duly convicted.” The vistages of the 13th Amendment have fuelled the growth and development of a criminal justice system where blacks are incarcerated at five times the rate of whites, and is a direct product of police brutality against blacks. The recent murders and the inability of the criminal justice system to respond in an equitable way has led to protests and/or riots in all 50 states.

Martin Luther King Jr explains it best when he said, “Certain conditions continue to exist in our society, which must be condemned as vigorously as we condemn riots. But in the final analysis, a riot is the language of the unheard. And what is it that America has failed to hear? It has failed to hear that the promises of freedom and justice have not been met. And it has failed to hear that large segments of white society are more concerned about tranquillity and the status quo than about justice, equality and humanity. And so, in a real sense, our nation’s summers of riots are caused by our nation’s winters of delay. And as long as America postpones justice, we stand in the position of having these recurrences of violence and riots over and over again. Social justice and progress are the absolute guarantors of riot prevention.”

Despite the reality of injustice, Martin Luther King Jr did not practise or participate in riots, but promulgated non-violent protests, civil disobedience and voting as the best way to achieve justice and equality. He was joined in Philadelphia by Opportunities Industrialisation Center’s Rev Leon Sullivan, who practised non-violent protests against businesses that did not employ blacks, while simultaneously creating businesses and job training programmes for blacks in the community. Today, these legendary leaders were joined in thought by Terrence Floyd, the brother of George Floyd (deceased), who stated, “I understand that you are upset, but not as upset as I am. If I’m not over here wilding out … . If I’m not over here breaking stuff … . If I’m not over here blowing up stuff, then what are you doing? You are doing nothing. You are destroying your own community. Let’s do it another way. Let’s do something different. Vote! Educate yourself, know who you are voting for.” Mr Floyd brilliantly summarises what we must do as a society to bring change.

As business/organisational leaders and business owners, we can bring change now by speaking out against visible injustice and implied bias, versus being a part of the deafening silence practised by the majority.

This is especially true for our white business and civic leaders who remain largely silent. We can begin to adopt diversity and inclusion as a core value in our organisations, both in word and deed. Business leaders must make visible and equitable changes in hiring, staffing, promotions, board and executive appointments, vending, and supply chains. As Stephen Glasko, chief executive officer of Jefferson University says, “We must reimagine diversity as our new reality.” We must advocate for equitable funding in education and job training, and take a leadership role in both supporting and holding our schools and government accountable. We must support voter education and citizen participation, versus voter suppression, so that the very people that are destroying our businesses and neighbourhoods can become ‘civically’ engaged.

The rioting protesters also want to bring about change in the broader society, but they are going about it the wrong way. Organising and voting is the best way to bring about immediate change. As a nation, we have the timely opportunity to make changes in our leadership within the next five months, versus another five decades of waiting since the death of Martin Luther King. If all the protesters would vote at the local, state, and federal levels, they could change the country in 150 days. Therein lies the power of change that gives hope to our democracy. Will they do it, or do they just want the satisfaction of burning down the neighbourhood? Burning and looting will only lead to more of the same.

Stoddart is vice-chairman of Global Philadelphia. He is a board member of the Anti-Defamation League and co-chair of the Black Jewish Alliance and president of Young Caribbean Professional Network which provides scholarships to Afro/Latino and Caribbean university students.