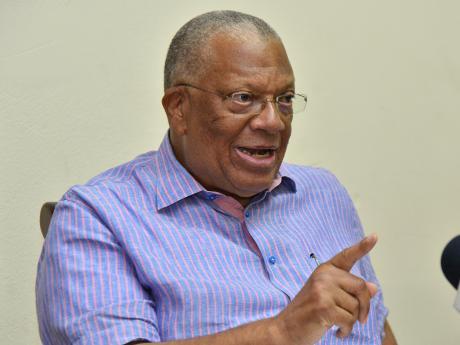 Holness issued a statement on Sunday reaffirming his position that his administration did not reject the 2015 offer.

“From my perspective and for all intents and purposes, the offer was effectively already rejected by the PNP during their term,” said Holness.

But, this was rebuffed by Phillips in a statement this afternoon and he accused Holness of using the UK prison offer debate as “a feeble attempt at blaming others for the deteriorating prison conditions and lack of proper governance of  correctional facilities.”

The Leader of the Opposition, Dr Peter Phillip, M.P., says there needs to be no controversy over the UK offer to assist Jamaica in building a new correctional facility, as the Cabinet Office and Ministries of National Security and Foreign Affairs and Foreign Trade have the records which can be made public.

In a statement this afternoon, Dr Phillips said the Opposition repudiates in the strongest terms, the account given to the nation by the Prime Minister that the offer was implicitly rejected by the PNP Administration, through a lack of follow up of the MOU signed by both countries, and was therefore inactive when his government took office.

Dr Phillips said Prime Minister Holness should recall that he had vociferously opposed the prison offer from as early as during the official visit of British Prime Minister David Cameron in November 2015 and repeated his opposition many times during the 2016 general election campaign.

In our final comment on the issue in the House of Representatives, the then Minister of National Security, Peter Bunting, pleaded with the Parliament to approach the issue with an open mind, examine the concerns against the country’s Human Rights record and Jamaica’s international reputation, and the possibility of creating a world-class Correctional System of Rehabilitation and Reintegration.

The Leader of the Opposition said he recalls that the then government continuously sought the support of the JLP Opposition up to the time it left office to reach a consensus on this sensitive issue. Throughout this entire process, we did not sign the Prisoner Transfer Agreement.

“This was neither tantamount to a rejection of the co-operation to build the new facility nor allowing the issue to lapse.

The Ministerial statement by Peter Bunting is conclusive evidence of the status of the matter under the PNP government,” Dr Phillips emphasised.

He further said that the red herring which the Prime Minister is attempting to put across the trail is a feeble attempt at blaming others for the deteriorating prison conditions and lack of proper governance of the correctional facilities.

The Opposition Leader said the statement in the Senate by the Minister of Foreign Affairs and Foreign Trade, and the Leader of Government Business on January 13, makes it absolutely clear that her government rejected the offer and closed the matter.

“It is the rule that Ministerial Statements and Answers to Questions are done through Decisions of Cabinet and so the Prime Minister needs only to refresh his memory and then come clean to Jamaica, on the decision of his own cabinet,” Dr Phillips said. In fact, the Minister refused to disclose reasons for the rejection, saying she would not disclose discussions between the two governments.

The People’s National Party (PNP) is clear that the rejection of the prison is within the authority of the administration of the day and therefore, it is puzzling as to why the Prime Minister is pursuing an unprovoked resurrection of a dead issue to cover up the mounting failures occurring in the National Security and Justice portfolios.