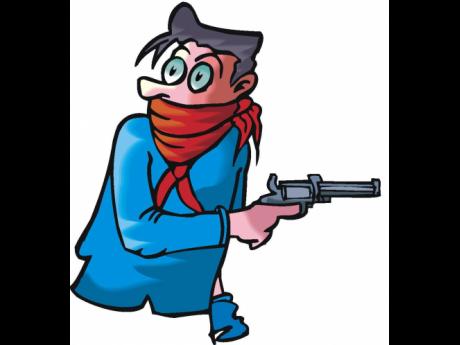 The directive that all Jamaicans should wear protective masks as COVID-19 risk-management measures is seemingly being exploited in St James, where mask-wearing thugs have been carrying out brazen robberies and escaping.

One such robbery took place at Barnett Street, Montego Bay, last Tuesday afternoon when two mask-wearing armed men robbed a Chinese-operated supermarket and got away with cash, cigarettes, and other items.

According to reports, shortly after 7 p.m, a number of customers were shopping inside the supermarket when two men posing as customers walked into the business place. They did not spark any suspicions until they brandished handguns and robbed the establishment of over $150,000 in cash, several stacks of phone cards, and over $300,000 worth of cigarettes.

Tuesday night’s robbery was not an isolated incident, as according to information reaching The Gleaner, several business operators have reportedly fallen prey to mask- wearing armed robbers, who have been targeting the Montego Bay business district.

“Wearing a mask may work for COVID-19, but it is surely another epidemic for us as business operators,” business operator Garth Brown told The Gleaner. “I operate a business in Montego Bay and I was robbed last week. Although I informed the police about the incident, I did not bother to travel to the Barnett Street Police Station to file a report, because the robbers were wearing masks like everybody else.”

“We can no longer blame the police because they are responding when they are informed of a robbery, but when they look at the CCTV cameras all they see are men in masks, which is not enough to identify the culprits,” the businessman said.

Prior to the COVID-19 pandemic, the police in St James, through the recently install quick response motorcycle unit, were getting a handle on street crimes in Montego Bay, making a number of arrests. However, a police source said they feel like they are back to square one, because robbers are now using the masks to blend in with law-abiding citizens.

“We as police officers in St James are doing all we can to apprehend these armed robbers, but the task is almost impossible with everyone wearing a mask,” the policeman said. “We are seeing persons getting away with pickpocketing, the stealing of cell phones, and armed robberies because victims are not able to identify these robbers, even if they are standing before them.”

One business operator is suggesting that the Government should ban the wearing of hats until the COVID-19 pandemic is over. According to him, it is almost impossible to identify a person wearing a cap and a mask, even in cases where you know the person quite well.

“I have seen people who I know very well in mask and hat and if they did not greet me, I wouldn’t know it is them,” said the businessman.

The police are also bemoaning the fact that the CCTV, which has emerged as an important crime-fighting tool in recent times, is not effective in the COVID-19 environment.

“The CCTV is basically useless, because with everybody wearing a mask, how do you differentiate one person from another person. Personally, I can’t wait for this COVID-19 situation to end so that we can function normally again,” said the policeman.