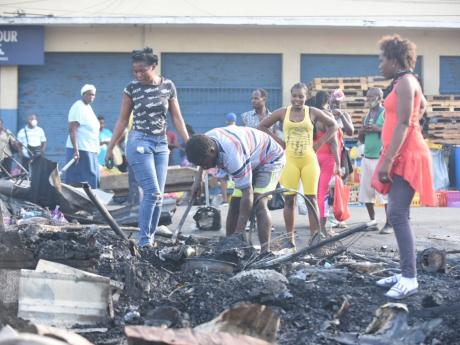 Moments after heavy gun fire erupted in a section western Kingston last night, a blaze engulfed the popular 'Ray Ray' market destroying everything in its path.

It is not clear if the two incidents were related.

However, the fire started some time after midnight.

WATCH: Two vendors who owned shops inside the Rae Rae market, downtown Kingston, were distraught as they walked through what was left of their shops. One man says he lost six refrigerators with meat and that fires have been set to the area many times each year. (Kenyon Hemans) pic.twitter.com/fwhl1Z1DEE

Firefighters, who are still on the scene conducting cooling down operations, said the cause of the blaze is still unknown but investigations are continuing.

The devastation drew a large crowd of people, many of whom are vendors.

Meat vendor Eucal Gray said he lost nearly $500,000 in his family business as a result of the fire.

His sister-in-law Cynthia Fenton was at a loss.

"This is unreal. We lose everything striking thing. Everything gone just like that," she said.

They are not alone, fellow vendor Ezekiel Brown complained that security in and around the market district needs improving.

He said he is not surprised that a fire has again caused him to lose hundreds of thousands of dollars in investment.

"Something has to be done. Why this market every year is lit and nobody can tell us how?" he questioned.

"It tells me something is wrong!" said Brown, while calling for the local government ministry to invest in securing the markets.