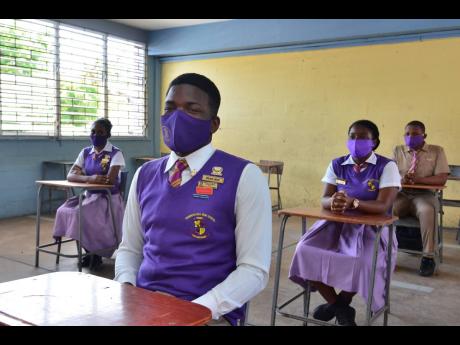 Kenyon Hemans/Photographer
Fifth-form student and head boy at Pembroke Hall High School in St Andrew, Darrion Anderson (foreground), said he was more than happy to be back in a physical classroom after a three-month break.

“Coming to school today, after not seeing your friends for months, it was hard not to just jump on them and hug them,” the head girl of Pembroke Hall High School in St Andrew told The Gleaner shortly after the day got going yesterday.

Secondary schools across Jamaica have been reopened for four weeks to facilitate refresher classes for students sitting external examinations, which will commence in a month’s time.

Ruth-Ann shared that while she was initially worried that some students would not observe the physical-distancing guidelines, “that fear has somehow subsided”.

Yellow circles and grey rectangles were seen around the compound, indicating where to stand and where seats should be placed, respectively.

Mandatory temperature checks were conducted at the gate and walking in single file is a practice students are getting used to.

The Reverend Claude Ellis, principal of the school, told The Gleaner that roughly 120 students were expected to turn up yesterday and there was about 80 per cent attendance.

The process went smoothly apart from two hiccups – students arriving at school hours before their scheduled classes and others showed up without masks.

However, the principal noted that disposable masks provided by the health ministry were issued to those without the protective gear.

“We are a social group and so the challenge is getting the students to remain distant, and so it’s almost like you’re policing the students. We actually have individuals who are assigned social-distancing monitors because we know how students are, we are a culture of hold and touch and being close to each other,” Ellis said.

Following an orientation session, students headed to see what their new-look socially distant classrooms were like and in most classrooms, only 15 students were accommodated.

Darrion Anderson was more than happy to be back in a physical classroom as he said he did not grasp much from online classes.

“I prefer to be in a classroom setting with a teacher because I’m a visual learner,” he said, adding that information technology was his most challenging subject.

Anderson attempted past paper questions during the time spent at home and hopes to be well prepared for the exams at the end of the revision classes.

Fellow student Tasheika Messam said she was 80 per cent ready for exams and has completed all her school-based assessments (SBAs).

“I have studied over the break and it has helped me to be more attentive to my schoolwork. The ministry is giving us an opportunity to interact more with our teachers face to face and to get more help, and I am very grateful for that,” she told The Gleaner.

Grade 11 coordinator Jodi-Ann Carnagie explained that a lecture-tutorial format has been adopted.

Students will attend timetabled classes Mondays to Thursdays, and Fridays are set aside for SBA completion.