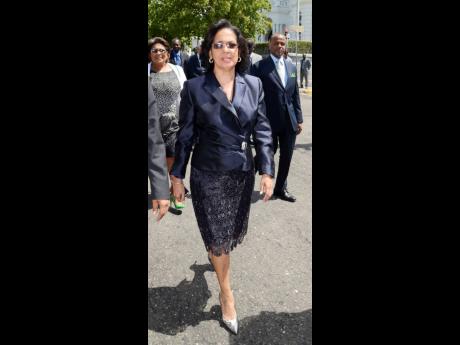 Despite officialdom remaining mum on plans for the North East St Ann seat made vacant by the passing of Shahine Robinson, who served as member of parliament for just shy of two decades, some constituents have weighed in on the type of person they would want to see following in her footsteps, even as they grieve the woman they referred to as their queen.

Last week, parliamentarians saluted their fallen colleague, who passed away from cancer on May 29, remembering her as a friend to all, caring, accommodating and someone who breached party lines in order to help constituents and non-constituents alike, and whose beautiful and alluring smile would break the coldest political ice.

As The Sunday Gleaner sought to find out the type of candidate who would best fit the North East St Ann mould, representatives of both the governing Jamaica Labour Party (JLP), to which she belonged, and the opposition People’s National Party (PNP) declined to engage in such a discussion.

“Any talk of a replacement or any elections at this time is disrespectful to her memory and contribution to politics,” said JLP Chairman Robert Montague. “We are not dealing with that at this time. We are mourning – the party, her constituency, and her family. We want to bury our queen and lay her to rest with all the love she deserves.”

PNP General Secretary Julian Robinson also sang from the same hymn sheet, saying such a discussion was not in good taste. Two weeks ago, the party named Keith Brown as its standard-bearer for the constituency.

Inside Robinson’s North East St Ann stamping ground, constituents were still reflecting on how she won their hearts over the years with her beauty and kindness.

“When Shahine entered the House of Representative in 2001, she was the most beautiful thing to look at. She was the second woman to sit on the Opposition benches in the Lower House since 1989. Only [Olivia] ‘Babsy’ Grange was on the JLP side,” one constituent, who asked not to be named, told The Sunday Gleaner.

“She was the most beautiful thing to enter the House of Parliament before Lisa Hanna and since Madame Rose Leon (late 1960s and ‘70s). With both of them (Grange and Robinson) in the House, it made it beautiful to look at,” said the man, who claimed to have spent many years following political happenings.

Robinson was a poster girl for several entertainment events in the tourism parish of St Ann, which has four constituencies – one of which she represented for 19 years, just a year shy of the automatic qualification to receiving a national honour.

Before politics, Robinson worked in the banking and tourism sectors.

The then Edward Seaga-led JLP selected her to be its candidate in a 2001 by-election after the resignation of PNP MP Danny Melville. She defeated Carol Jackson to have her first stint in the House, retaining the seat in the subsequent four general elections.

A United States citizen by naturalisation, she renounced it after dual-citizenship court challenges were brought against a number of MPs following the 2007 general election.

Despite the JLP’s official position, some constituents have been mulling over prospective replacements as whispers on the ground grow louder.

Carl Smith, who resides in the Lime Hall division, said Matthew Samuda is one name he hears being linked to the seat.

“I think she would do a good job,” she told The Sunday Gleaner. “I just hope and pray.”

Melody Rhoden, who votes in the St Ann’s Bay division, has other ideas. She believes Senator Kamina Johnson Smith should be parachuted into the constituency.

“In my view, I like Kamina Johnson Smith because that is the only person I see right now who can fill Miss Robbie shoes,” she said.

Johnson Smith, the minister of foreign affairs and foreign trade, has been linked to the constituency since news began swirling that Robinson was gravely ill. However, a senior party source told The Sunday Gleaner last week that “she does not appear to be interested in representational politics”.

However, another said: “Johnson Smith is [Prime Minister Andrew] Holness’ trusted lieutenant, who is a very capable and experienced senator. With [Pearnel] Charles [Jr] no longer in the Senate, the Senate and the kind of work she does there would be greatly diminished. Frankly, for the most part, several senators are there for numbers. She has to stay there.”

Other names linked to the constituency include under-fire St Ann’s Bay Mayor Michael Belnavis, and two female councillors – one from St Mary and another from St Ann – not named among those previously mentioned.

Belnavis told The Sunday Gleaner that while it was not at the forefront of his mind right now, he would make himself available if asked.

None of the constituents polled expressed a desire for a by-election.

Robinson held several positions in Government over the years, serving as minister of state in the Office of the Prime Minister with responsibility for local government (2007 administration), and minister without portfolio in the Ministry of Transport and Works (2011 administration). Up to the time of her death, she was the minister of labour and social security, appointed since 2016.

* Carl Gilchrist contributed to this story.