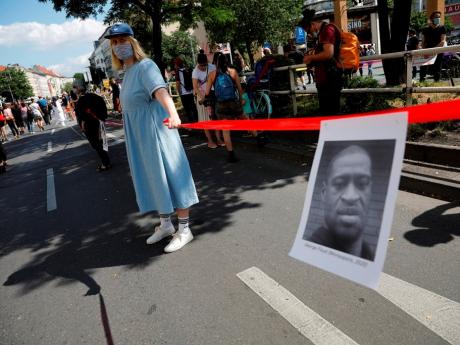 A picture of George Floyd hangs from a ribbon held by demonstrators during the 'This is solidarity' demonstration of the movement Unteilbar (Indivisible), in Berlin, Germany today. The demonstration against racism, anti-semitism and discrimination is supported by several anti-racism and anti-fascism organisations and takes place in the wake of the recent killing of George Floyd by police officers in Minneapolis, USA, that has led to protests in many countries and across the US (AP Photo). 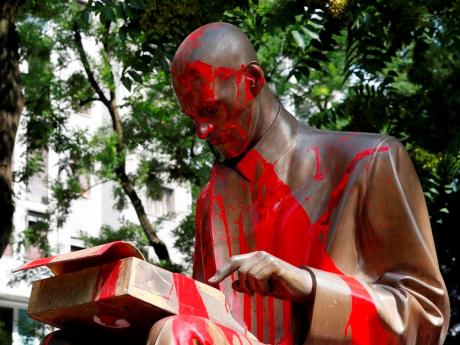 Red paint is seen on a statue of late Italian journalist Indro Montanelli, inside a park in Milan, northern Italy today. Montanelli, who inspired a generation of Italian reporters, admitted in the late 1960s that he had a 12-year-old Ethiopian bride when he was a soldier during the Italian occupation of Ethiopia. The death of George Floyd at the hands of Minneapolis police officers sparked a reexamination of the injustices and inequalities underpinning many countries’ histories (AP Photo).
1
2

At least seven police officers in Minneapolis, Minnesota in the US have quit and another seven are in the process of resigning, citing a lack of support from department and city leaders, as protests over George Floyd’s death escalated.

Current and former officers told The Minneapolis Star Tribune that officers are upset with Mayor Jacob Frey’s decision to abandon the Third Precinct station during the protests.

Demonstrators set the building on fire after officers left. Protesters also hurled bricks and insults at officers, numerous officers and protesters have been injured and the state has launched a civil rights investigation into the department.

US Rep. Ilhan Omar told CNN today that the department is “rotten to the root.”

Meanwhile protests continued in several cities across the US and also in Europe.

In Las Vegas, Nevada, an officer who was shot in the head during a Las Vegas protest of the death of George Floyd in Minneapolis is paralysed from the neck down, on a ventilator and unable to speak.

Officer Shay Mikalonis was shot on June 1 during protests over the death of Floyd at the hands of police.

The officer’s family released a statement Saturday through the police, saying the 29-year-old is expected to stay on the ventilator.

Prosecutors have charged a 20-year-old man with deliberately shooting Mikalonis during the protest. A judge who reviewed evidence at June 5 court hearing said that police video shows Edgar Samaniego “walking by, taking out a gun and firing ... at officers.”

He is charged with attempted murder and is being held in lieu of $1 million.

Protesters tore down a bust of a slave owner who left part of his fortune to New Orleans’ schools, and then they took the remains to the Mississippi River and rolled it down the banks into the water.

The destruction yesterday is part of a nationwide effort to remove monuments to the Confederacy or with links to slavery as the country grapples with widespread protests against police brutality toward African Americans.

Police said in a statement yesterday that demonstrators at Duncan Plaza, which is directly across the street from City Hall, dragged the bust into the streets, loaded it onto trucks and took it to the Mississippi River where they threw it in. Two people who were driving the trucks transporting the bust were apprehended by police and taken to police headquarters, authorities said. Their names were not given in the statement.

The police did not identify the bust, but local media identified it as one depicting John McDonogh. When he died, McDonogh left a large portion of his money to New Orleans and Baltimore for schools, and many schools in New Orleans are named after him.

Video on social media showed dozens surrounding the bust, which sat on a pedestal while some people pulled on a rope tied to the bust and another hit it.

As the bust tilts and then crashes to the ground the crowd cheers. Another video posted on social media shows a crowd watching as the bust is rolled down the rocky banks of the Mississippi River and into the water.

Mayor LaToya Cantrell said in a tweet that the city “rejects vandalism and destruction of City property. It is unlawful.”

Large protests over police brutality and racial injustice have again caught the nation’s eye, but demonstrations have been part of the city since shortly after it was founded in 1851.

This week, demonstrators have staked out several blocks near downtown Seattle.
They named the area the “Capitol Hill Autonomous Zone,” and demanded broad reforms. They have been criticised by President Donald Trump, who has called them anarchist occupiers.

Demonstrators formed a planned nine kilometre chain in Berlin in a message against racism, among a range of other causes.

Organisers of Sunday’s “Indivisible” demonstration were told to require participants to wear masks, and protesters were also asked to maintain social distancing.

They were linked by coloured ribbons, forming what organisers called a “ribbon of solidarity” that stretched southeast from the Brandenburg Gate to the Neukoelln neighbourhood.

Protesters in Milan, Italy scrawled "rapist" and "racist" on the statue of a late Italian journalist who had acknowledged having had a 12-year-old Eritrean bride, while stationed in the Italian colony in the 1930s.

The statue of Indro Montanelli, inside a Milan park that bears his name, has been a flash point in Italy’s Black Lives Matters protests, which have put renewed focus on Italy’s colonial past. Activists are also pushing for Italy to grant automatic citizenship to those born in Italy to parents who are permanent residents.

Montanelli, who died in 2001 at 92, was one of Italy’s most revered journalists, honoured by the Vienna-based International Press Institute in 2000 as among the 50 World Press Freedom Heroes. A noted war correspondent, he chronicled contemporary Italy from its colonial era through fascism, Italy’s post war reconstruction and the anti-corruption scandals that overturned Italy’s political class in the 1990s.

In 1977, he was shot four times in the legs by the Red Brigade domestic terror group. He also mentored many of today’s top Italian journalists.

French police officers held a small overnight protest at the Arc de Triomphe monument in Paris amid police anger over what they call unfair accusations of racism and brutality.

A few dozen officers lay their handcuffs on the ground and surrounded the landmark with patrol cars, blue lights flashing to call attention to their cause, in images broadcast on French media and shared on social networks. Police unions held similar protests last week.

The Arc de Triomphe action came hours after at least 15,000 people demonstrated across town against racial injustice and police violence targeting minorities.
The protest was among many in France in recent weeks inspired by the Black Lives Matter movement and George Floyd’s death in the US.