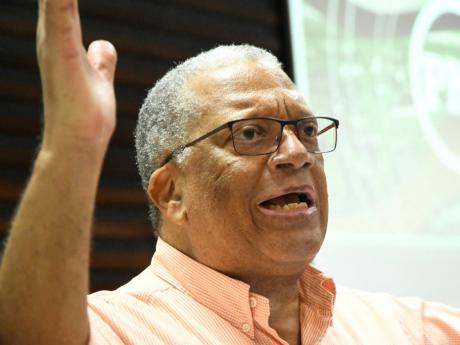 Opposition Leader, Dr Peter Phillips speaking today at a meeting of the People's National Party at The University of the West Indies, Mona.

President of the People’s National Party (PNP) Dr Peter Phillips has asserted that the leadership of the St James Municipal Corporation was seeking to undermine the minority caucus because of their efforts to expose corruption at the local government level.

Speaking at a PNP meeting held at The University of the West Indies, Mona today, Phillips said there was a link between happenings at the St Ann Municipal Corporation, which is now under investigation by the Integrity Commission, and the booting of two PNP councillors from the St James Corporation.

Senator Charles Sinclair, councillor for Montego Bay North East, moved the motion against Sylvan Reid, councillor for the Salt Spring division, and Gladstone Bent, representative for Catadupa, citing their absences at the March, April, and May sittings.

The action was taken pursuant to Section 30 (1B) of The Local Governance Act, which states: “If a person elected to the office of mayor or councillor ... is absent from three consecutive ordinary meetings of the council without the leave of council... , that person shall, thereupon, become disqualified immediately and shall cease to hold the office.”

But Phillips felt that it was an abuse of power, given the COVID-19 pandemic.

“The two events together tell a story. In St James, the Jamaica Labour Party majority is abusing power to avoid oversight and accountability, which is to be provided by the minority. It is an abuse of power and dishonesty,” Phillips charged to cheers from close political organisers in the party.

“In St Ann, there is also an abuse of power, but it’s of a different form. It is a pattern which is also evidence from the reports received from the Kingston and St Andrew Municipal Corporation (KSAMC) where the internal audit committee that was set up under the previous administration is being dismantled,” Phillips said.

Phillips said the result in the end was a “shameful” misuse of public funds urgently needed by Jamaicans who are suffering under the pressure caused by the COVID-19 pandemic.

An internal audit at the KSAMC has unearthed irregularities spanning the period January 2017 to December 2019.

“Stealing is bad at any time, but to steal from people in [a] crisis represents the lowest depths of corruption that has ever been seen in this country,” Phillips declared.