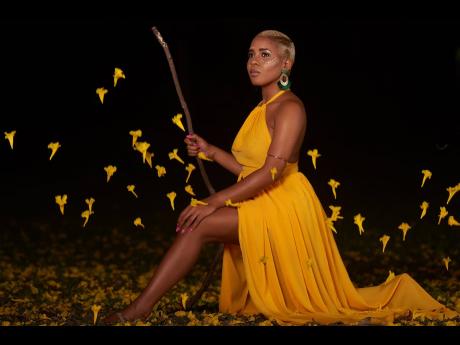 SHE SPENT days wondering what went wrong, why it went wrong, and why her family was encountering a mountain of challenges.

Moving from house to house and being displaced as soon as the stage of settling came took a toll on her, and with each step made forward, there seemed to be several other setbacks.

Twenty-six-year-old Tamaya Henry was born in a rural community called Jeffery Town, St Mary. Her mom was an all-rounder who did odd jobs to make ends meet, and her dad was a carpenter.

The older of two for her father, she said that although she was the youngest of four for her mother, it was not until adulthood that she met her older siblings.

She knew her mother to be a strong woman, but during her childhood, things began taking a turn for the worse.

“When I was about seven years old, I realised that my mom was struggling with something. She was always tired, didn’t have much energy to do things around the house, and had frequent mood swings. Things got so bad, it cost her her marriage and her children. It was not until I was in my teens that I understood that she was mentally challenged. Her illness changed everything for my siblings and I,” Henry lamented.

Her mother grew incapable of caring for her, and there began the life-changing moves.

“She gave me to my grandaunt, who also tried her best but after a year was unable to care for me due to financial constraints. Eventually, my dad stepped in and shipped me off to my aunt who lived in Portmore, but that living arrangement, too, was short-lived as my aunt moved me back to St Mary to live with my grandmother. Sad to say, I moved about five times after that, spending less than a year in each home, and it was not until the fifth moved that I was able to experience some stability,” Henry told Family & Religion.

Stability came when Henry was introduced to her stepmother, Cynthia Wynter, who was a school cook at the time.

“I met her just before starting high school, and she has never missed a PTA meeting, awards ceremony, report day, or school competition, and had it not been for her, I would have missed out on sitting my CXC examination. Cynthia was not the typical stepmother, and she was dedicated to mothering me even after she and my father broke up,” she said.

Being separated from her biological mother brought on a lot of mixed emotions for Henry, and she daydreamed constantly about what her life would look like without these unfortunate circumstances.

“In my early teens, I remember understanding fully what my mom was going through, and it would break my heart every day to know that I was not in a position to help. Even though I was a high-schooler at the time, I still managed to put my hairstyling skills to use, and that allowed me to earn enough to get Mommy groceries sometimes. As I grew older and older, her mental health, physical health, and living condition worsened. It all got so frustrating sometimes because she was hurting and fading away, and I didn’t know what to do,” Henry said.

In the chaos, she had to become self-aware, learn how to defend herself, protect her mind from negativity, and master the art of focusing on her dreams.

As her mindset changed, so did the circumstances and her dream of attending university was realised.

“I’ve always dreamed of completing university, being on TV, being a nurse, a military woman, and a philanthropist. I’ve always wanted to be that human who does her best to educate, inspire, and entertain. My dreams became even clearer when I was selected as a head girl of Guy’s Hill High because it was then that I recognised my power to lead, to influence, and to change lives for the better,” she told Family & Religion.

With the assistance of her pastor, Giovanni Franklin, Henry enrolled at Northern Caribbean University (NCU) to study nursing, but she ended up pursuing mass communication.

She encountered financial challenges, which have paused her studies, but she still managed to land a job she dreamed of.

“During the fight for my degree, I met Mr Michael Sharpe. He was one of my lecturers at NCU who did not hesitate to introduce his students to the world of media. It was not long after that a few other students and my self-started to volunteer with the Jamaica News Network (JNN). While volunteering, I was offered a job,” she said.

Join us next week as we share the details of how Henry managed to become an author and land another dream job, all while dealing with the loss of her mother.