UPDATED: Rough road to restitution - Children of vendor mowed down by JUTC bus struggling to move on; no assistance from company 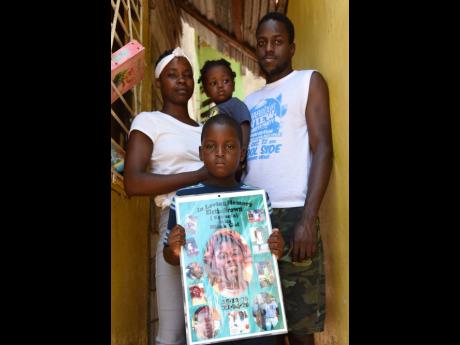 Ian Allen/Photographer
Twenty-year-old Cameshia Simms (left) holds her one-year-old brother Gregton Wilson as her other brothers, Carl Robinson, 25, and Melvin Smith, 6, look on. Melvin is displaying a memorial poster of their mom, Eletia Brown, who died after being hit by a JUTC bus two months ago. The family says they have not received any assistance from the state-owned bus company. 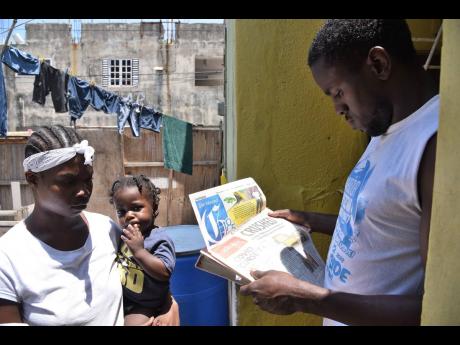 Ian Allen/Photographer
Carl Robinson (right), son of Eletia Brown, who died after being struck by a JUTC bus along Harbour Street in downtown Kingston two months ago, looks at a Gleaner story on her death. Looking on are his sister Cameshia Simms (left) and one-year-old brother Gregton Wilson.
1
2

Two months after Brown was crushed by a Jamaica Urban Transit Company (JUTC) bus in downtown Kingston, the mournful picture is among the last reminders of their mother’s warm embrace.

The two are the youngest of four children left behind by the handcart vendor, whose death has remapped life for their struggling older sister, 20-year-old Cameshia Simms, who is now their primary caregiver.

Brown’s death adds to a list of at least eight pedestrians, motorists and cyclists killed in JUTC bus crashes during its 2019-2020 financial year. The company was involved in 845 crashes over the period. The company also reported 1,041 crashes in 2018, and an excess of $200 million in judgment and settlement payments over the periods.

But while Brown’s family await redress in the courts, her children have been living on dwindling handouts from relatives daily.

With less than a month before her funeral, the children now contemplate selling her prized belongings to give her a meaningful send-off while the state-owned bus company flip-flops over assisting with funeral expenses.

“I went to them (JUTC) and told them that we needed help; if it is even two buses to put towards the funeral. We were told that they were not going to do anything unless otherwise instructed by the court,” fumed the oldest sibling, Carl Robinson, 25.

“So after killing off my mother and having us wait for an autopsy for two months, this is what they are saying. I really want to know what kind of justice this,” he added.

Last Friday, JUTC’s Deputy Managing Director in charge of Operations Godphey Sterling directed The Sunday Gleaner’s queries to the public relations department, even though his office leads on the issue. Robinson said he has been enduring a similar run-around.

“My mind go and come sometimes. Not to say I need to go to Bellevue (mental hospital) but to know that I have two younger ones to take care of. It is hard for them because their father is not there for them,” he said.

“None of us don’t have any father, and now everything they want it is either me or Cameshia. Right now, none of us are working,” he said, noting that he has been sharing his bedroom in a shaky Parade Gardens family hovel with his three siblings.

“I don’t live anywhere, and it is one little room here. Now, I must take care of them, plus I have my son. It is really stressful,” bemoaned Cameshia, almost coming to tears.

“Mi don’t have a roof. That is the hardest thing. Mi willing to take care of my two brothers dem because I don’t want them to go anywhere else and nobody ill-treat dem. Mi know mi mother would not want that. The only thing stopping me is that I don’t have a roof,” she explained. “I just need some help to get some board to box up two room for me and my brothers dem because this is our yard. This way, I can move around my mother’s things.”

Ongoing gun violence has rocked the Tel-Aviv/Southside strongholds in Parade Gardens for years, resulting in a string of murders and shootings in recent months. This is particularly stressful for the young mother, who fears for the well-being of her siblings.

Last Friday, Rochelle Dixon, communications head at the Child Protection and Family Services Agency, said the organisation was aware of the incident and is trying to see how best to provide aid for the children. Dixon dispelled fears that the younger children would be removed and separated.

Brown was struck and crushed by the bus shortly before 5 p.m. on Port Royal Street in downtown Kingston. The bus reportedly switched lanes before hitting Brown, who sold sweets and snacks outside the Digicel headquarters for many years. Her body was reportedly dragged for metres before the unit stopped.

She is to be buried on July 12, and last Friday, JUTC Communications Manager Cecil Thoms was hesitant to commit to the JUTC helping with funeral costs.

“There is an outstanding court matter that needs to be settled. We are hoping that can be done in short order. I have not seen anything to my mind that charges will be brought [against the driver], but I await the outcome of the investigation by the police,” he said.

The driver at the centre of the controversy remains off duty, The Sunday Gleaner understands.

NOTE: An earlier version of this story had incorrectly stated that the JUTC had mowed down 845 people. The company was, in fact, involved in 845 crashes, at least eight of which were fatal.