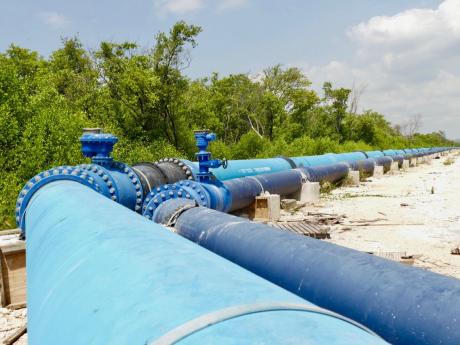 Scores of residents in several Corporate Area communities are set to experience a significant improvement in their water supply as the new 600 mm pipeline at Ferry in St Andrew is now in operation.

The old system resulted in major disruptions for customers.

The National Water Commission (NWC) says the new system serves communities along Washington Boulevard up to Dunrobin Avenue, where it interconnects with the recently commissioned 700 mm diameter transmission main that was laid along Constant Spring Road.

Among the communities to be positively impacted are Washington Gardens, areas along Molynes Road, Upper Waltham, Seaward Drive and Olympic Way.

NWC president, Mark Barnett, who recently toured the area, said he sympathised with those who had little of the precious commodity, especially during the 2018 yuletide season.

He stressed that it was not something the NWC was comfortable with, although measures were put in place to reduce the impact on the affected communities.

Barnett further emphasised the importance of the new pipeline, which is not only part of the NWC’s comprehensive plans for efficient distribution of the commodity, but also part of broader efforts to build resiliency and reliability within the network.

“What it does in a time of drought or extended dry period, we use the water from the White Marl/Tulloch Spring Systems to augment what we would have been producing from Constant Spring and Mona facilities. Where there are shortfalls in those systems as it is now, the new Ferry system will help to reduce the impact of those shortfalls”.

A section of the pipeline that was previously constructed along Washington Boulevard has also been activated.

It is envisioned that this will reduce the frequency of breakages, thus improving service delivery.

“We have been able to weather the proverbial storm. Our customers rightly demand the best service, the NWC is mindful of that, I am very mindful of that, and so these achievements are geared towards satisfying the demands of the people we serve,” Barnett said.