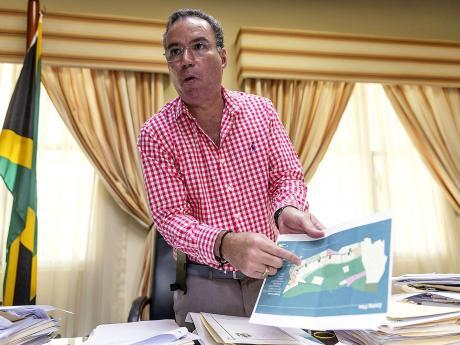 Daryl Vaz, the minister with responsibility for the environment - File photo

Daryl Vaz, the minister with responsibility for the environment, has admitted that he knew the “sensitivity” of his position in government when he offered to lease lands bordering the protected Holywell National Forest Park in St Andrew to build a private cabin.

Vaz has been forced to come public following a Jamaica Observer report today in which the caretakers of the park raised concerns that the National Land Agency (NLA) was leasing lands within the buffer zone of the Blue and John Crow Mountains National Park, a world heritage site.

The NLA buckled under public pressure and has, without explanation so far, withdrawn the offer to lease the lands for 25 years at $120,000 per annum. In Photo: A section of the Holywell National Forest Park in St Andrew

Vaz said his initial 2019 application for the 7.7-acre property was approved by the Forestry Department but a divestment committee later decided that the land should be advertised.

He was unsuccessful in getting permission to plant coffee.

“My proposed use of the land was in keeping with the already existing environmentally-friendly Holywell party-type cabins,” he said in a statement posted on his Twitter account this afternoon.

The Jamaica Conservation and Development Trust, which manages Holywell, wrote to the NLA on June 11 objecting to the lease offer, noting that the proposed land is one of the few remaining sites in the area "under good forest cover and will require the clearing of trees".

It also noted that the land was within the area submitted by the National Environment and Planning Agency for expansion of the Holywell recreational area.

“Following receipt of the objection, I immediately wrote to the NLA on June 11th, withdrawing my offer submitted on June 4th 2020,” the minister said, noting that he had carefully followed the guidelines and procedures “knowing the sensitivity of my position”.

Vaz also revealed that he had unsuccessfully applied for 10 acres of land at Mt Horeb, opposite Holywell and on the boundary with his West Portland constituency.

He wanted to build a log cabin and plant coffee, a feature he said was not new to the area.

Vaz said the NLA indicated then that the Forestry Department did not support the location and he should look elsewhere.

The NLA has been silent on the matter but executive director of the trust Dr Susan Otuokon, told The Gleaner this afternoon that she received an email from the entity’s head Elizabeth Stair advising of the decision to withdraw of the offer.

Otuokon had lectured Stair in the June 11 letter that “we have an obligation to protect this country’s natural heritage for the people of our country, as should you, and not look to be divesting any portion of it to any single influential person in the society.

Offers were expected to be deposited at the NLA's Kingston offices by 1:00 p.m today and opened 15 minutes later.

The Jamaica Environment Trust has expressed concern that such an offer could have been contemplated.

“The fact that this was even considered speaks to numerous underlying structural and legislative problems associated with protected area management and environmental conservation in Jamaica,” the group said in a Twitter post.