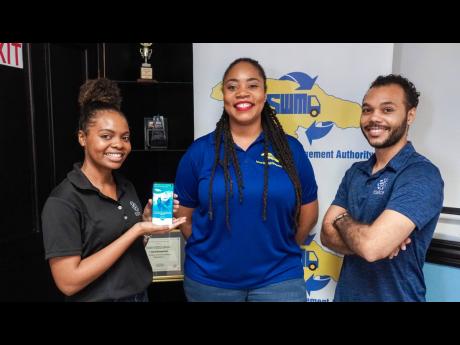 “An inefficient solid waste management system can create serious negative environmental impacts, (such as) infectious diseases, land and water pollution, obstruction of drains and loss of biodiversity,” said a release from the NSWMA.

With features including ‘Report’ on garbage in the public space, the ‘Pick-up’ schedule for the island, and ‘Recycling’ tips, the new app is intended to help to guard against those outcomes.

“Residents who submit a report receive a reference number and are updated following the removal of the garbage,” noted Kimberley Blair, community relations manager at the NSWMA.

“Already, residents have been really helpful. They have reported not just in Kingston, but in Clarendon and Ocho Rios, and those sites were visited and cleared within 24 hours,” she added.

The app was developed by Esirom Limited, a company known for its success in the digital landscape and which also prides itself on working on projects that perform a social good.

“Throughout the development and design process, we felt it was important to produce a product that was presented attractively but also easy to use, so that people could seamlessly report dumping. I encourage all Jamaicans to make use of the app and assist the NSWMA in their mission,” he said.

“The app will aid in the betterment of our public spaces, roads, schemes, communities. This will bring comfort to all Jamaicans and visitors, and Esirom was elated to facilitate this process,” added Esirom Director Alex Morrissey.

The app is available for both iOS and Android users and can be accessed by typing in: NSWMA in the Apple or Google Play app store.