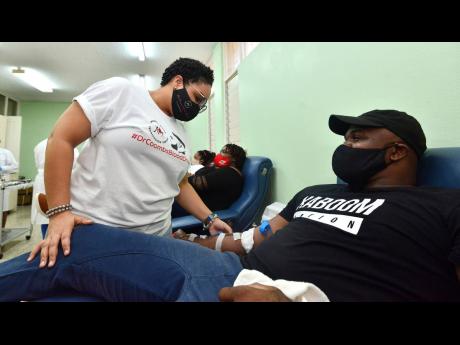 A move to suspend non-elective surgeries in public hospitals across the island has not helped much to boost the stock of blood needed to provide life-saving support in critical and emergency cases.

The Gleaner has learnt that all public hospitals are being affected by the shortage, which has been causing some doctors to second-guess whether criminals needing care should be getting the life-saving substance over other patients in dire need.

Last Friday’s shooting of six policemen, two fatally, placed the spotlight on the shortage as the Jamaica Constabulary Force took to social media, appealing for blood donors to lend support to the injured cops.

“We are in dire need of blood and blood supplies,” Kevin Allen, CEO of The University Hospital of the West Indies, told The Gleaner, describing the situation as critical.

Hospital officials say that while elective (non-emergency) surgeries are all but on hold indefinitely because of the coronavirus pandemic, they are still being pressed primarily because of gunshot and accident cases.

The Ministry of Health and Wellness added that if three per cent (88,000) of Jamaicans gave a unit of blood once a year, there would be enough to meet the current demand. However, reliable Gleaner sources have indicated that there is less than 1,000 units currently in the island’s stock.

The lifespan of a pint of blood is 120 days while blood products last a year, and patients get blood, red cells, platelets, or plasma from donations.

“Blood requests are triaged. All urgent requests are supplied, and the remainder of the requests are usually supplied over time. There may be a delay in the supply and or units may be supplied in more than one disbursement if all requested units are not available at once,” Dr Michelle Hamilton, head of the National Blood Transfusion Centre (Blood Bank), explained to The Gleaner.

no culture of donations

Health officials say that the shortage is partly due to Jamaica not having a culture of donations given for use as required by individuals unknown by or unrelated to them. In most cases, donations are usually made by friends, relatives, or colleagues for a named beneficiary. As such, hospitals, medics, and charities usually try to boost stock through blood drives.

Dr Phillip Coombs and Dr Khia Duncan are among physicians in the public sector trying to raise awareness in the public about the importance of blood donations.

Coombs, a surgical resident at the Kingston Public Hospital, who is also known as Doc Ravers, had 97 persons taking part in two blood drives last month at the Kiwanis Blood Collection Centre at the National Chest Hospital. He said he was moved to arrange the initiative due to the growing list of persons unable to have their surgeries done because of the shortage.

Duncan, a senior resident ear, nose, and throat surgeon at the same institution, has also been actively promoting blood drives.

“I got involved through a group called Citizens Response Jamaica, which comprises doctors, scientists, engineers, business people, designers who are trying to support the healthcare system by building ventilators, manufacturing personal protective equipment ... and designing hospital equipment,” she told The Gleaner yesterday. “We decided to have a group help with the Blood Bank donations.”

She is asking Jamaicans to find creative ways of getting others to donate the life-saving substance by, for example, having blood drives as part of birthday celebrations.

“Every time some of us must make a decision on how to distribute the precious commodity when criminal elements are rushed to hospital emergency rooms needing blood after causing law-abiding citizens to bleed out, but we have to remain truthful to the oath,” said one doctor last week.

Another doctor expressed similar sentiments, that the shortage at times triggers a double-think, but the Hippocratic Oath, which requires medics to uphold specific ethical standards, eventually triumphs.

“Frankly, every time I have to postpone a surgery because we do not have enough blood, I think about the oath, especially as the criminal elements injured in shooting are emergency cases and require blood. It’s on the minds of a lot of my colleagues,” said the surgeon, who works in the public health sector.