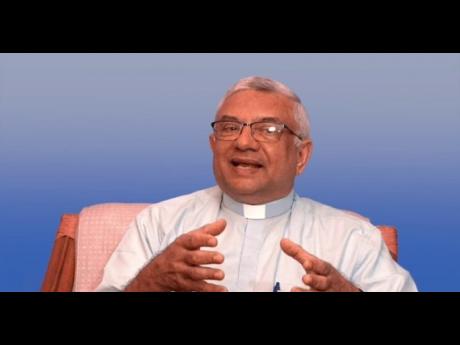 Father (Fr) John Persaud, was on Friday appointed as the Bishop of Mandeville (photo contributed)

Father (Fr) John Persaud from Guyana, has been appointed Bishop of the Catholic Church in Mandeville, Manchester.

Persaud's appointment came yesterday, and, according to him, he did  not refuse the position because he could not say no to God.

During a Zoom meeting with fellow members of the Catholic Church, Persaud received much encouragement and advice.

Persaud says he is anxious to get to Jamaica to get the ball rolling, however,  there have been no flights out of Guyana to get to the island.

"We are living in COVID-19 times. My first reaction would have been to fly to Jamaica tomorrow, but I can't because I am locked down here. I can't go as early as I would like, to meet with the clergy. I may have to organise a Zoom meeting."

As he prepares to depart the Catholic church in his birth land Guyana, he is determined to do God's work where ever he was sent.

"When I moved to Trinidad for the first time, people kept asking me if missed Guyana. When I came back to Guyana, they wanted to know if I would miss Trinidad. Wherever you put me, I make it my home. I am looking forward to making Jamaica my home and to build relationships," he said.

The Most Reverend Francis Alleyene, Bishop of Georgetown, Guyana, said Persaud's departure from the diocese is a huge loss."

He was among a batch of nine. Each member of that batch has been admitted to the priesthood.