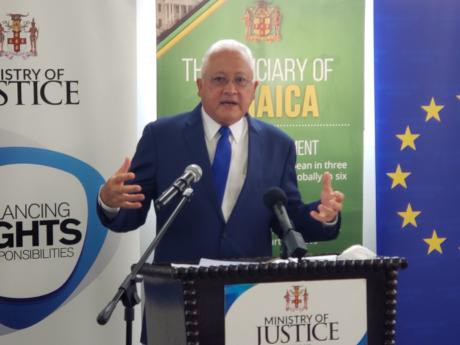 Minister of Justice Delroy Chuck speaking at a digital handing over of audiovisual equipment valued at over $85 million from the European Union on June 26, 2020 - Contributed photo.

Touting the benefits of the greater use of technology within the island’s courts, Minister of Justice Delroy Chuck this morning said that with the donation of audiovisual equipment worth over $85 million from the European Union, Jamaicans can look forward to saving time and money.

The equipment will be installed in 59 courts across the island.

It was outlined that 19 courts had been previously outfitted with audiovisual equipment under the programme.

Speaking at the digital handover, Chuck said that having the technology systems would not only speed up the delivery of justice, but would also assist in case scheduling, case flow, docket management, jury selection when necessary, and digital recording.

Chuck, along with Chief Justice Bryan Sykes, appealed to defence attorneys to support the digital direction into which the courts are heading.

"One of the things people notice and sometimes complain about is how long it takes for a case to be dealt with. With this technology, it will not be necessary for the judge to take down everything verbatim. The transcript will be available, and this will ensure that transcripts are more readily available when a case goes on appeal.

"If we can provide the technology in the prisons or police stations, then persons who had an application for bail can easily remain where he or she is - in the police station or in the prison. And the technology is such that he or she can see exactly what is happening in the court, and the court, the judge, the lawyer can see the person," said Chuck.

In addition, the justice minister indicated that the ministry is currently equipping buses with the technology, which are to be used to facilitate cases for persons such as those in lock-up who are seeking bail or a mention-date hearing.

Chuck highlighted that one of the major benefits is that lawyers from rural parishes such as Westmoreland and Hanover won't have to travel to Kingston to be in court.

"Sometimes when they have, like, bail applications, they can stay at a remote location and do cross-examinations or pleading as the case may be," he noted.

Sykes appealed to members of the private Bar to support the initiatives, saying that this would help their clients to get a fair trial in a reasonable time.

"A number of them do not wish to have bench trials even though the law makes provision for it. There is this idea that they need to have a jury trial. I am not just speaking to lawyers, but to defendants to let them know that there is provision in the law, and you need to ask your lawyer about if you can have a trial without a jury. The only trial that needs a jury is a murder trial, where the death penalty is at issue, which is such a small percentage of cases now."