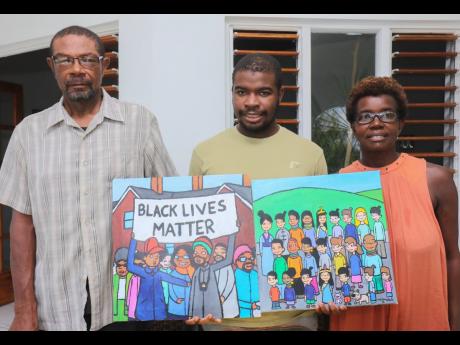 Ashley Anguin/Photographer
Neville and Janice Thomas flank their son, Martin Thomas, as he displays two of his paintings.

His best-seller is tagged ‘One Nation’, as he gets his inspiration from people of different races worldwide.

But autism has not devalued the artistic skills of 24-year-old Martin Thomas, who has created a niche for himself with his paintings, illustrations and products such as cups, key rings and holiday cards, under his brand ‘mARTism’.

Born in the United Kingdom to Jamaican parents, Thomas moved to Jamaica at eight months old. By age four, he was diagnosed with the developmental disorder, evidenced in his inability to speak.

With the support of his loving and attentive parents, Neville and Janice Thomas, the young artist was able to overcome many hurdles.

In fact, Thomas communicates through art.

“I love painting and drawing cartoons,” said the young entrepreneur, whose website mARTism.com, created by his older brother Marcus, has become a staple for art lovers.

“Martin started painting at age 16. I took him out of school because he was not interested in academics; he only wanted to paint. So I found a private institution for art and placed him there. He has never looked back since,” his mom told The Sunday Gleaner.

“Drawing has always been his passion and I have thousands of his cartoon drawings saved for him. He would spend days drawing on paper, but refused to part with some of them. So we had to get him to do things on canvas, which is where the painting came in,” Mrs Thomas added.

Most notably, Mrs Thomas is happy her son is making an income from his work.

“It has always been my goal for him to be successful, knowing that I wasn’t going to be around all the time. I needed to find something for him to do in order for him to make a living for himself,” she said.

His dad also agreed that becoming independent was important to Thomas’s future.

Reminiscing on how difficult it was to get an autistic son organised, the mother of two said that, in the early days, she had to coordinate everything for him. But as he got older, his got much better at organising things.

As young Thomas became more organised, his interest and skills became more pronounced and he started playing the keyboard at church, finding special joy in playing Jesus Loves Me, What a Mighty God We Serve and Real, Real.

“Anything you ask him to play, he will play. Once it is from his memory or he hears the song, he is very quick at learning,” he said. “He is a part of the youth group at church and he plays for them whenever there are any shows or exhibitions there.”

Thomas was to have his own art exhibition in March this year, with plans to also bring awareness to Autism Month in April, but was thrown off course by the COVID-19 pandemic.

“We were going to have someone from the Montego Bay Autism Society give information on autism. We are still planning on having it, but we are watching to see if the virus permits us,” Mrs Thomas said.

Over the years, the young artist has participated in a number of annual exhibitions, including the popular Arts and Craft Fair in Kingston, since his art instructor, renowned artist Elgo Lewis, entered the young painter in his very first exhibition, Artwalk, in 2013.

He has also done an exhibition in London, England.

“Parents would buy his paintings for their children’s room,” said Mrs Thomas. “[Additionally,] people would ask him to paint something specifically for them, whether a picture of their family members or something that means a lot to them.”