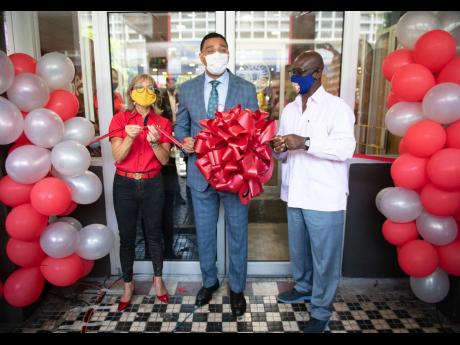 Prime Minister Andrew Holness used Thursday’s resumption of dining at restaurants in Jamaica to rally investors and entrepreneurs to reignite economic activity to emerge from recession.

Lauding Thalia Lyn, founder and CEO of Island Grill, for opening a new restaurant on King Street in downtown Kingston, Holness said that it was critical for businesses to reclaim customer traffic and to call back on board thousands of workers laid off amid the COVID-19 pandemic.

Dining options were outlawed in the height of the outbreak locally, because of the risk of spread through contact.

“Businesses are closing, people are being laid off, investors are making decisions to put off their investments, but here is Thalia Lyn going against the grain, taking a risk, opening up her store here, even though she has had to close others, and employing people.

“That is what has been one of the greatest thrills in being here.”

The prime minister emphasised that there was nothing systemically wrong with the economy. The economy is projected to shrink by up to six per cent in fiscal year 2021.

But Holness urged investors to adopt a positive outlook and to seize the day, whether in construction, food, or other sectors.

NOT ONLY ABOUT STATISTICS

“Economics is not only about statistics and numbers, economics is also about psychology.

Further, he said the economy would not be able to be shut down forever and that Jamaicans would have to adapt to the new normal of infection prevention. This includes physical distancing, sanitisation, and temperature checks.

On Wednesday, Local Government and Community Development Minister Desmond McKenzie announced the ending of the dining restrictions for restaurants, pointing out that no more than four customers would be allowed to sit together at each table.

McKenzie warned that it was prohibited to join tables to accommodate large groups and that each establishment should ensure that proper sanitisation is maintained.

He also announced the conditional reopening of cinemas, playhouses, and theatres for 14 days, effective Sunday, July 5.