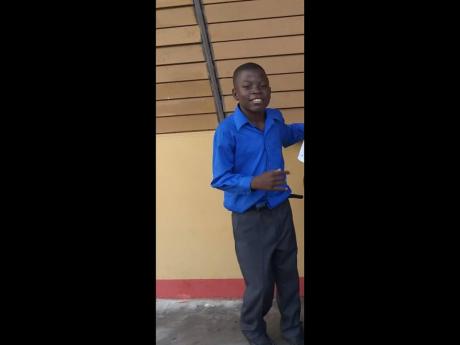 Geovaughn Allen was struck by a motor car.

A footballer? Or a scientist to develop his eco-friendly ‘Geo-Towns’ that would change the health of the world? The possibilities were endless for young Geovaughn Allen before he was struck dead by a motor car while celebrating his matriculation into high school two Fridays ago.

What was supposed to be a happy outing ended in tragedy about 8:30 p.m. on June 26 as Geovaughn, 11, crossed the Kingsland main road in Mandeville, Manchester, after urinating in bushes opposite the Gas Mart parking lot. The incident occurred hours after news emerged that the boy was placed at Black River High School in his home parish of St Elizabeth.

The youngster was flung several metres by the Mitsubishi motor car, killing him on the spot.

Relatives and the community of Burnt Ground in Santa Cruz are now inconsolable as they battle the grief of losing their ‘star’.

Geovaughn adds to 189 persons killed in 171 fatal crashes since the start of the year and represents one of 18 children mowed down since January.

On Thursday, Geovaughn’s father, Leon Allen, fought back tears as he spoke of a budding future cut short.

“Sunday gone was my birthday and I was planning to come down here and we sit down and enjoy ourselves. I was shocked in the night when they tell me that ‘Geo’ dead,” Allen told The Sunday Gleaner, his voice quivering.

“Me hear people talk, but me never really experience this. Every time I talk, it just come in like something is burning me in my chest. I cannot find the time or moment when I think about the youth and tears don’t come to my eyes. I don’t know how I will ever get over this.”

Geovaughn lived with his grandmother and uncle Tamario McRay, who took him and his cousins – one of whom had been placed at the Bishop Gibson High School the same day – for Chinese food and pizza, following their Primary Exit Profile (PEP) results.

Geovaughn, McRay said, had his sights set on attending St Elizabeth Technical or Munro College, where he wanted to play football, so his placement at Black River High was disappointing. The outing, the uncle said, was aimed at cheering him up.

According to McRay, they had purchased the meals, and, on their way back home, stopped at the Gas Mart so he could use the restroom. However, it was closed and so McRay opted to use bushes across the street. Minutes later, without his knowledge, Geovaughn stepped out of the car and followed.

“My spouse told him to urinate at the front of the car, but he walked around the car, so I don’t know if he didn’t hear what she said or if he was saying it wasn’t right to pee on the property, but he went across the road,” McRay recalled. “We saw him and I sent my son to pilot him back across the road and that’s when it just happened so fast.”

Although relatives have been offering reassurance and comfort, the uncle blames himself.

“It has been very rough. When it just happened, I told myself that my goodwill actually killed my nephew. It is really heart-rending for me to know that I carried them out and something of this nature happened. I blamed myself,” he shared.

Sitting on their verandah, Geovaughn’s grandmother and aunt wiped tears from their cheeks, as his mother, Neisha McRay, cried.

“He is my life. I have a special love for Geo. A special love. I keep wondering why,” sobbed the grieving mother, clutching a photograph of the youngster.

Vice-principal of the Marie Cole Memorial Primary School, Pauline Wray, who was also Geovaughn’s teacher in grades one and two, also wept uncontrollably as she spoke of a bright youngster, who always wanted to do things his own way. She said the entire school community has been grieving his loss, especially this year’s graduating class, of which Geovaughn would have been a part.

It was unclear whether the driver of the motor vehicle was warned for criminal charges by the police, but the family say they are awaiting further information from the investigators, even as they redirect money for graduation and school supplies to burying him.