US is Caribbean’s best option despite COVID-19 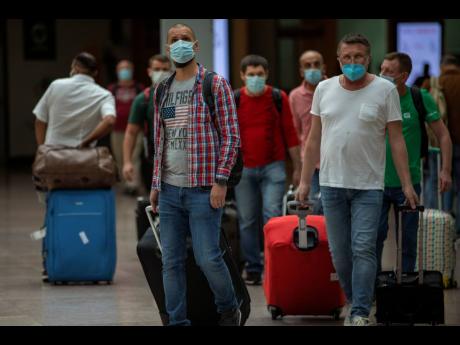 AP
Of the approximately 7.7 million tourist visits to the Caribbean during the first quarter of this year, 48.4 per cent came from the US, according to the CTO.

Americans are commemorating their Independence Day holiday weekend under the cloud of record rises in COVID-19 cases and the number of deaths from the virus approaching 130,000, according to figures published by Johns Hopkins University.

Several states, including Florida and Texas, continued to record unprecedented numbers, which health officials and experts blame on premature reopening of businesses, the uneven use of masks and increased travel. And, Dr Anthony Fauci, the top medical expert on the pandemic, said the country was going in the wrong direction in its efforts to contain the virus, warning that the number of new cases could reach 100,000 a day if the authorities didn’t rethink their approach.

The inability of the Americans to contain the virus has led a number of countries, including the European Union (EU), to ban travel from the United States (US). The authorities in England on Friday announced the relaxation of travel restrictions for more than 50 countries, including Jamaica and several Caribbean countries, but placed the US on a ‘red list’ of high-risk countries that Brits are advised not to visit for non-essential reasons because of its continued high level of coronavirus cases.

However, Caribbean countries, including Jamaica, which have begun to reopen their borders to international travel, are looking almost exclusively to the US market, much to the consternation of some.

“Are you kidding me? Stop depending on the US for sustainability. Everyone is closing their borders to US and they [Jamaica] are opening up their borders to US. WOW,” someone using the moniker Paula Providence posted during a Facebook Live media briefing this week, organised by the Barbados-based Caribbean Tourism Organization (CTO) in which Jamaica’s tourism minister, Ed Bartlett, participated. Providence was one of several commenters who quizzed Bartlett on the subject as he updated a global audience on protocols and other matters related to the reopening.

In response, Bartlett explained that unlike the EU, which has a population of 446 million, and where it’s easy to travel by ground transportation, Jamaica and the Caribbean did not have this luxury. In addition, its proximity to the region makes the United States the obvious choice, he said.

“The US is our market, that’s our life,” Bartlett stressed. “Let’s not kid ourselves. For all of us in the Caribbean, at least 50 per cent of our market is the US. In the case of Jamaica, we are well over 70 per cent – when you add cruise and stopover, we’re well over 70 per cent – so there is no gainsaying the value of that market. And so we have to manage it, and manage it as best as we can … and so, it for us is a no-brainer.”

Of the approximately 7.7 million tourist visits to the Caribbean during the first quarter of this year, 48.4 per cent came from the US, according to the CTO, continuing a trend that has persisted for decades. This heavy reliance on the American market, though, has left many Caribbean countries in a bind, and has placed some at odds with each other, over the spiralling rate of COVID-19 infection.

The Dutch Caribbean island of Curaçao has threatened to ban all travel to and from its neighbour, Aruba, should the Arubans proceed to welcome American visitors from July 10 as planned, and Dutch St Maarten was forced to postpone its plans to receive flights from the US at the last minute, after it emerged that French St Martin would close the land border which they share on the 33-square-mile island if the Americans were allowed into Phillipsburg.

Meantime, Grenada, which had earlier announced plans to open its borders on July 1, reversed course just two days before the flights were scheduled to begin arriving, and the Dominican prime minister, Roosevelt Skerrit, said this week he was prepared to keep his country’s borders closed until December, if this was what it took to avoid a second wave of the virus, which has killed over 517,000 people globally, according to World Health Organization figures.

There’s a clear risk of a second wave if flights from the US are allowed in at this time, Dr James Hospedales, the former executive director of the Caribbean Public Health Agency, told The Sunday Gleaner, even as he recognised the importance of the US market to the Caribbean’s tourism sector.

Hospedales, who this week launched a new NGO, EarthMedic, to address planetary health issues, warned that the virus is likely to be around for a very long time.

“Remember that the 1918-19 [Spanish] flu pandemic circulated for 20-plus years afterwards. If the virus missed you one year, it got you another time,” he said, while stressing that frequent opening and closing of international borders would be detrimental to the industry.

The risk facing those that open to the Americans hit home in Antigua and Barbuda less than three weeks after the twin-island state reopened its borders, when 39 visitors tested positive for COVID-19 upon arrival. This forced government and tourism officials to scramble to reassure visitors and locals alike that the matter was under control.

Still, Anton Edmunds, St Lucia’s ambassador in Washington, agrees that the Caribbean is limited in its options.

“While the Caribbean is forced to rely on the US because of its access and size of market, one could argue that the nearness and variety of options [cities] to fly into the Caribbean from the United States gives the region opportunities to react to any negative results,” Edmunds, a former executive director and chief executive officer of the private economic development organisation, Caribbean-Central American Action, told The Sunday Gleaner.

“The Caribbean can well decide to be nimble and react to risk and rise in the importation of COVID-19 cases by limiting travel from source-infected markets. The ability to shift away from hotspots in the US, yet still welcome visitors from safer American locations, is possible. The fact that New York and other cities are discouraging and blocking people from high-risk areas could be the way the Caribbean may itself have to react going forward.”

This, of sorts, is what Jamaica has done by requiring that, as of July 10, travellers from Florida, New York, Arizona and Texas – all high-risk states – take a molecular COVID-19 test seven days before arriving in the country.

However, Hospedales argued, while this may help limit the number of infected people entering the region, the risk will remain for a very long time.