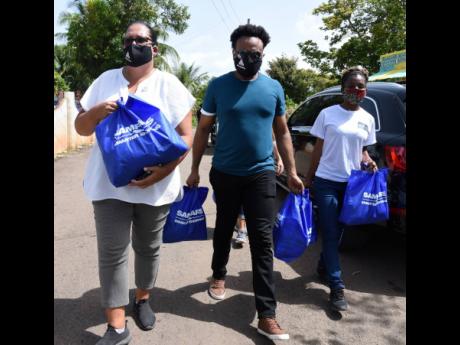 From a package of grocery delivered to his house every two weeks, 65-year-old Gershan Henry has been able to secure regular meals for himself, his dog, and his two feline friends.

A heart patient who lives alone, Henry looks to his pets for company, but the care packages are equally important, because they help him to sustain himself since he has been unemployed for the last five months.

“It’s kind of rough, ennuh, because I am not working again and the little money I was saving, it kind of done out inna medication,” said Henry, who worked for several years as a tractor operator.

“No matter if is one tin of mackerel mi cook, I still let them taste a little piece, I don’t eat it for myself alone,” he said.

In the Savannah area of Wakefield, Linstead, St Catherine, where he resides, several of his neighbours have also been finding it very difficult to survive due to COVID-19. In a bid to ease their burden, the Private Sector Organisation of Jamaica (PSOJ) and the Council of Voluntary Social Services have been partnering to supply them with relief packages containing groceries and toiletries.

More than $182 million has been raised and over 38,000 packages have been delivered through the PSOJ COVID-19 Jamaica Response Fund up to July 2. Several partners have come on board to ensure the success of the initiative. Among them is the Mona Geo-Informatics Institute, which risk-profiled communities for support. Over 800 communities across the island were assessed based on 22 data sets. After the assessment, which included factors such as crime, unemployment and poverty, the top 25 were selected.

Linstead was listed as the second most vulnerable community, and so every two weeks, police officers along with community volunteers visit Wakefield and other communities in Linstead to distribute the relief packages to the most destitute. Although most of those who spoke to The Gleaner have far more mouths to feed than Henry, they all contended that the packages usually last for more than a week.

“The beneficiaries are people who are elderly, people with co-mobilities, people living in extreme poverty; so really, kind of those suffering the greatest as a result of the COVID fallout, and who are at greatest risk of severe illness if they were to catch COVID,” said Saffrey Brown, project manager for the response fund.

She noted that in addition to team members going across various communities in Jamaica to distribute food packages, relief supplies were also given to varying non-government organisations to distribute to their vulnerable members.

Annette Thompson, a 34-year-old resident of Wakefield, has lost her jobs as a child caregiver and a practical nurse since COVID-19 hit Jamaica in March, but volunteering her time to identify the most vulnerable in her community, and assisting with the disbursement of the packages, has thrust her into another fulfilling role.

“It really is a rewarding feeling. When you give the package over, there is a smile on the persons’ faces and they really appreciate the packages,” she said, as she joined two police officers and a small team from the PSOJ to take the packages to those who need it the most.

For Senior Superintendent of Police Beau Rigabie, the distribution of the packages have been the perfect anecdote to heal the sometimes tumultuous relationship between citizens and police. The St Catherine North Division boss spent most of Saturday morning in Cheese Field, also in Linstead, where packages were also being distributed.

“We now have one-to-one interaction with many persons that we didn’t get the opportunity to speak with to before. Relatives of these shut-ins and elderly persons have received us in a very hospitable way, the fact that they see this softer side of us (policemen),” he said.

His officers generally visits the communities every two weeks on Thursdays, Fridays and Saturdays to distribute the goodies.

“They [resident] have a contact number for most of us now and they would even call us now. Some persons have the misnomer that we are unapproachable, and this gives us an opportunity to lend ourselves differently and they are calling us now with, you know, minor issues, which we can facilitate and give support and solutions,” he told The Gleaner.

But the PSOJ COVID-19 Relief Fund goes beyond the provision of groceries. It also takes into account the healthcare needs of the most vulnerable. The organisation has been providing health relief through the Diabetes Association of Jamaica (DAJ).

President of the DAJ, Lurline Less, said her team has been kept busy as they respond to the cry for medical care. She has seen where the health of the elderly, especially, has deteriorated since COVID-19 due to social-distancing protocols which results in them avoiding their health centres.

“Persons are calling from different areas for us to come to offer the services which are free of cost,” said Less, whose team conducted blood sugar, blood pressure and urine tests and took body weight measurements.

Less said the target in each of the community they visit is 30 persons, but so far, they have been exceeding this number.

Distribution of the packages, which started on May 7, is set to be completed at the end of July.