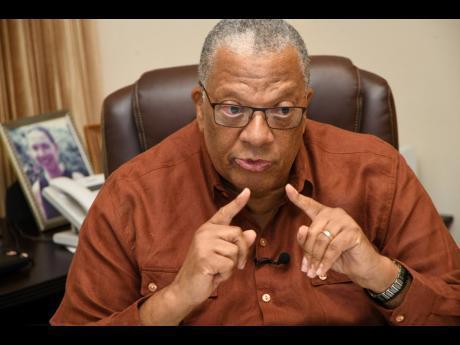 President of the People’s National Party (PNP),  Dr Peter Phillips, says there has been a systematic weakening of the local government structures by the Jamaica Labour Party-led municipal corporations.

Phillips says this has had the effect of "robbing some communities of adequate representation, and swinging the doors wide open for the continued raiding of the public coffers through the dismantling of the internal audit arrangements".

Addressing a meeting of PNP councillors, caretakers and leadership from regions 1 and 6 in Montego Bay on Sunday, Phillips said the action by the St James Municipal Corporation to remove two PNP councillors who did not attend meetings, because they were complying with the rules of the COVID-19 pandemic, was questionable and heartless and has left the people of Spring Gardens and Catadupa divisions without representation.

"This type of political shenanigans and one-upmanship weaken our democracy," he said.

“We don’t believe that there is any basis for their actions. The net effect is to weaken the accountability structures of local government in the St James Municipal Corporation; yet, they say that they believe in democracy and transparency.”

He said the deliberate effort to weaken the parish councils is also evident in the dismantling of the internal audit structures at the Kingston and St Andrew Municipal Corporation (KSAMC) that were left by the previous PNP administration of the municipality.

"This undermining of the internal audit function of the corporation has left the KSAMC without checks and balances to ensure the protection of public resources. Already, there are questions about the spending and accountability of funds, which have prompted the chief executive officer to call for an audit of the corporation’s expenditure."

Phillips congratulated the PNP caucus in the St Ann Municipal Corporation for their activism and vigilance in calling out the misdeeds surrounding Mayor Michael Belnavis and defending the interests of the people they serve.

He said the outstanding work of the minority caucus, along with the efforts of civil-society groups such as the National Integrity Action and the Jamaica Accountability Meter Portal, thwarted the total breakdown of the governance structures in the corporation.

“There is no difference between those who have just joined the JLP and those who have been there before. It seems as if they are all committed to the belief that public funds belong to them. We will not tolerate it, and we will resist it at every stage along the way. But most important, it highlights to us the importance of winning the elections,” Phillips said.