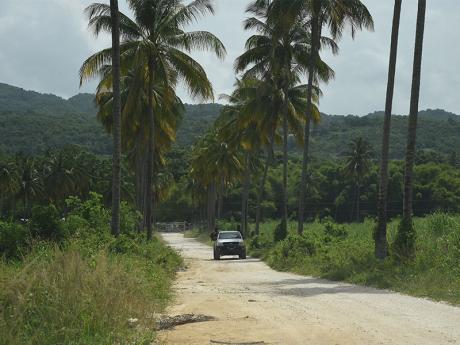 Lola Marshall-Williams, the partner of Cabinet Minister, JC Hutchinson, has resigned from the company that manages the Holland Estate in St Elizabeth amid conflict of interest concern.

In a statement today, Hutchinson, a minister without portfolio in the Ministry of Industry, Commerce, Agriculture and Fisheries (MICAF), said Marshall-Williams gave up her role because she did not want an agro-economic project at Holland to become embroiled in controversy.

The developments follow a Sunday Gleaner report that revealed contradictions in accounts from Hutchinson, and the Sugar Company of Jamaica (SCJ) Holdings about the selection of the Holland Producers Limited in 2019 to manage the lands.

Managing Director of SCJ, Joseph Shoucair, said the agency got a recommendation from the agriculture ministry to give possession of the lands to Holland Producers.

But Hutchinson insisted that his ministry had nothing to do with the selection process.

In his statement today, Hutchinson, however, revealed that in April 2019, he wrote to Shoucair “introducing” Holland Estate Management Company, the precursor to Holland Producers Limited which was formed a month later.

“Let me state categorically that I have in no way benefited from the lands at Holland, either directly or indirectly. It was never my intention to derive any benefit from the Holland lands, nor do I have an interest in Holland Producers Limited,” Hutchinson said.

MICAF oversees the SCJ and the Rural Agricultural Development Authority (RADA), one of the key institutions supporting farmers on the property.

Marshall-Williams is a member of RADA’s board and chairs the entity’s St Elizabeth Parish Advisory Board.

Mark Lee, another director of Holland Producers, is the deputy parish manager of RADA, St Elizabeth.

Chairman of RADA, Nigel Myrie has ordered an audit of the benefits the authority has provided to the 184 farmers who have been allotted lands on the property.

Opposition Spokesman on Agriculture Victor Wright has alleged that the arrangements put Holland Producers at a disproportionate advantage over other interests and cannot be allowed to stand.

Holland Estate is located in the St Elizabeth North Western constituency that a Hutchinson, a Jamaica Labour Party deputy leader, represents in Parliament.

Marshall-Williams is the party’s constituency liaison officer to the Electoral Office of Jamaica.

Hutchinson is pushing for the establishment of the Holland property as an agro-economic zone.