Speed limit has nothing to do with safety – Hare 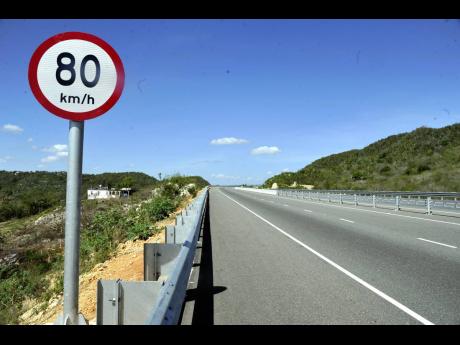 File
A speed limit sign along the Edward Seaga Highway.

Kenute Hare, director of the Ministry of Transport and Mining’s Road Safety Unit (RSU), is warning motorists that speed limit signs have nothing to do with road safety, noting that it depends on a driver’s ability to react to a potential collision in a timely manner.

During an online Zoom presentation about vehicular safety last week Tuesday, Hare said some countries have speed limits that reduce the chances of survival for motorists and pedestrians in the event of a collision, especially if the roadway is in a densely populated area.

“The speed limit has nothing to do with safety; it is all about convenience. There are areas across the globe where speed limits are set very high, and we know for a fact that if a pedestrian is hit at those speeds, the pedestrian just will not survive. You can put a speed limit on a road that is 80 kilometres per hour, but you may have a school there, or a high-traffic pedestrian area, so why would you do that?” asked Hare.

PEDESTRIAN CAN BE KILLED

The RSU director pointed out that the amount of time needed to respond appropriately in order to prevent a vehicular crash depends on the size and speed of one’s vehicle.

“To avoid a collision, it requires time to perceive and react. The faster you are going, the more time it is going to take you to stop that vehicle and the more distance you are going to have to cover,” Hare warned. “Also, trucks and cars are made differently. The car will stop quicker than the truck, and the truck’s acceleration and deceleration factor is much lower than that of the car.”

Since the start of the year, the RSU has recorded 190 fatalities from 172 crashes across Jamaica, a reduction from the 233 road fatalities recorded over the corresponding period last year. There have also been 39 pedestrian deaths to date, 20 fewer than in 2019.

St Catherine has so far recorded 33 road traffic deaths, the highest overall number for a parish, with the St Catherine North division having 16 deaths and 17 in the St Catherine South division. Westmoreland has the second-highest number to date, with 30 persons dying on the parish’s roads.