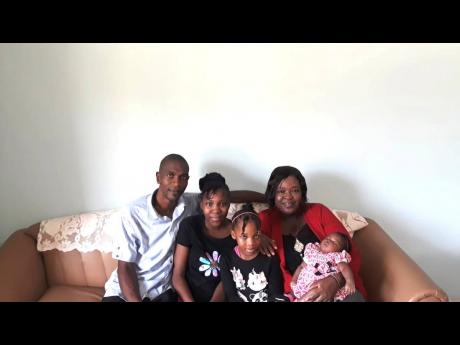 There are no words to describe the agony of a mother who watches helplessly as her young child endures pain that may be too much for her body to handle.

Nardia Russell-Smythe had her faith tested but learnt of God’s unwavering love for his people as she went through the ordeal of having her little girl, who just a few months old, battled cancer of the kidney - congenital mesoblastic nephroma.

“A date was set for a surgery to be done for the tumour to be removed. On the day of the surgery, doctors saw that the tumour was bleeding and was attached to her spinal cord, abdomen, and left kidney and was eating away at the kidney rapidly. Doctors told us that if they had tried to remove the tumour, it would have caused more damage,” said Russell-Smythe.

She continued: “When it was really confirmed that it was the dreaded disease, everything within me melted. I remember my husband had a Bible, and at Isaiah 53:5, he removed the pronouns and fit the baby’s name it so it would read, ‘But He was wounded for Danyelle’s transgressions, he was bruised for Danyelle’s iniquities: the chastisement of Danyelle’s peace was upon him; and with his stripes Danyelle is healed’... .”

Later, Danyelle’s case was assigned to a new doctor, who made it possible for the ailing baby to visit the St Jude’s Children Hospital in Tennessee, USA.

“Doctor Scott-Brown went above and beyond for Danyelle. We believe she was sent by God. She sent Danyelle’s information to St Jude’s Children’s Hospital in Tennessee to receive guidance on how to proceed with treatment, and they decided to take her case. I didn’t know how I would afford all this, but God made a way, and St Jude’s covered plane fare, accommodation, and assisted in any way they could.”

It was another time for God to show up in their lives, and this time, He blew their minds with a miracle that no simple mind could comprehend.

“… I declared healing over my eight-month old child as I left Jamaica. I think I prayed the entire flight. When we got to the hospital and all the tests were done, the doctors were in complete shock ... 90 per cent of the cancer that had spread through her body by this time could not be found. It had vanished, and the tumour that was there, which was a very large one, had shrunk. The remaining 10 per cent of cancer that was still in the body was inside the tumour, so the doctors safely removed the tumour along with the kidney that it was on.”

“I feel grateful to live to see my 12th birthday, especially because God told my parents I wouldn’t even live to see one year old. I feel very grateful and happy to be healed and delivered because I know I have a purpose,” said Danyelle.

Little Danyelle has her heart set on becoming a doctor to help children who are born with cancer.

“I want people to learn to have faith because God can heal and deliver you out of anything just like He healed and delivered me.”

Her mother added: “I saw God answer prayers and allow me to witness a miracle in our child. The fact that my daughter defied all the odds and has made it to 12 years old even with her one kidney, and to see how vibrant and talented and full of life she is, it continues to motivate me.”