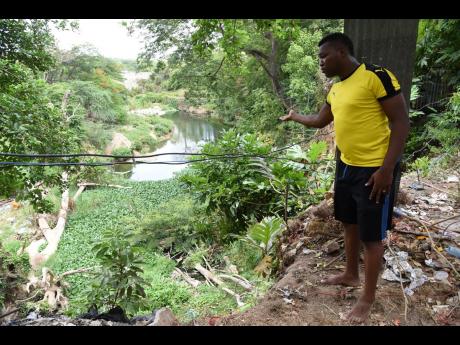 National rugby representative Reinhardo Richards is literally “living on the edge” and is gravely concerned about his home perched on the margins of the Rio Cobre.

Richards’ Barrett Street home in Spanish Town is on the verge of being swallowed by the river, as erosion of the bank has put life and property at risk. Already, he has lost livestock and trees.

“I have been living here for the last 22 years, and over the last three years, the Rio Cobre keeps eroding the land surrounding the house,” Richards said.

“This is very serious as my fruit trees, coconut, breadfruit, mangoes, have been washed away.”

Richards, who occupies the premises with five other persons, cringes every time dark clouds threaten a heavy downpour.

He’s worried that he might return one day to find only the spot where the five-room dwelling now stands.

Businessman Samuel Vanriel is also concerned about a rampaging river that has engorged itself on fridges, mattresses, stoves, fallen trees and other debris.

“I remember coming here to pick fruits, but with the rapid movement of the banks, it’s only a matter of time before everything in this vicinity is washed away,” Vanriel told The Gleaner.

“We have been asking the powers that be to address the problem of erosion and raw sewage flowing in the Rio Cobre,” Rose said.

“This problem is one of many. We just hope that help will come soon.”