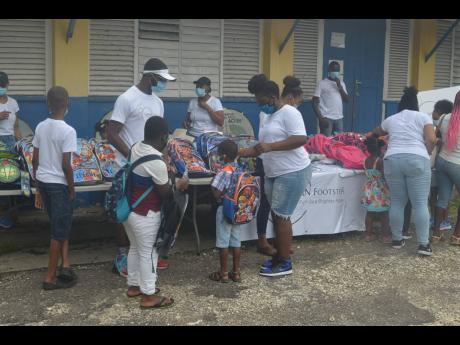 Photo by Christopher Thomas
Volunteers from the charity Caribbean Footsteps handing out bags and school supplies to students of Sudbury All-Age and Infant School yesterday.

Several students from the Sudbury All-Age and Infant School in Orange, St James, were ecstatic yesterday after they were presented with roughly 230 bags and school supplies by Caribbean Footsteps, a newly registered charity.

The happy recipients – from infant level to grade six – were gifted with bags containing stationery, including pens, pencils, notebooks, and rulers valued at $1 million.

Nine bags of classroom supplies were also given to teachers.

Wilmore Smith, father of a grade six student, heaped praises on Caribbean Footsteps, which has been doing similar projects since 2010 but was only registered as an official charity in Jamaica this past February.

“I see this venture as a good one for the parents as well as for the students because it is a means of taking some of the expenses off the parents,” said Smith. “Also, the students are enthusiastic because of the fact that they are able to collect things from Caribbean Footsteps. I say hats off to the sponsors for what they are doing here to help the young people of today to advance in their education.”

Yesterday’s donation was the second of two planned school visits by the charity. It followed a similar donation on Wednesday at Somerton Primary School, also in St James, where they distributed 240 bags with supplies to students.

Caribbean Footsteps Director Kereena Blake told Th e Gleaner that the charity’s work was inspired by her mother, who had instilled a spirit of generosity in her and her siblings while growing up.

“We grew up watching our mother, Diane McLeary, giving back to people in Jamaica … . She would come down every year and bring down barrels with food. What we try to do is give to entire schools … . Our goal is to give back to the community,” said Blake.

“We did not grow up with means, so we are trying to give back as much as we can in order to alleviate the burden of parents having to buy the school items themselves,” added Blake.

“Some of our parents are unemployed due to the pandemic, and some are unemployed aside from that, so this is really good, especially for now when they need assistance in preparing for back to school,” said Beecher-Wright.