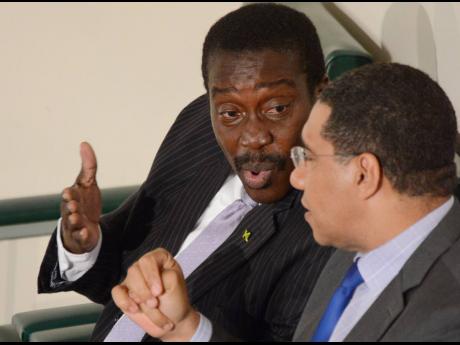 The Government’s failure to open the debate on proposed legislative changes to allow for parliamentary and municipal elections to be held simultaneously left the Opposition People’s National Party (PNP) stunned at last week’s sitting of the House of Representatives, as the window is fast closing on any such move.

The House, which is slated for recess this week, was served notice of the proposed amendment on Tuesday, July 14.

Opposition members reportedly attended last Tuesday’s sitting prepared to debate the issue, but were left surprised at its non-mention. PNP General Secretary Julian Robinson said the debate and passage is still possible on Tuesday, but a beeline would have to be made to the Senate for debate and passage by Friday, July 31.

“We were prepared to debate and discuss the issue on Tuesday, given the notification of the previous week. To say the least, we were surprised that the matter was not mentioned and, instead, the House found itself debating an extension to the existing states of emergency (SOEs),” Robinson told The Gleaner late last week.

He indicated that the Opposition has no disagreement with the proposed amendment.

“But if you look at the timeline, the House should be on summer recess, and the Senate, too. But bear in mind that the prime minister has the authority to call members to a sitting during recess. So we have to listen carefully what the House leader (Karl Samuda) says at the close of the [next] sitting,” added Robinson.

It is Samuda’s duty to advise House Speaker Pearnel Charles Sr when the sittings will resume or indicate recess.

For Robinson and the PNP, the extension of the SOEs and Prime Minister Andrew Holness’ promise not to hold general elections under such emergency security measures suggest the window on August elections may have closed. Without the amendment, the focus would shift to one election – the general, most likely.

Sources have told The Gleaner that despite Holness’ best efforts, there was internal disagreement within party circles about holding the two elections simultaneously. According to the source, a number of key Jamaica Labour Party (JLP) figures expressed their objection to the proposal, despite the near $750 million in savings to be accrued by combining the polls.

“The prime minister supports it and others, too, but I don’t think it’s going to happen this time around. Plus, the finance minister has already allocated the money for both elections,” said the JLP insider.

JLP Chairman Robert Montague said he knows nothing of any disagreement and could not speak to why the issue was not debated. He said yesterday’s scheduled meeting of the party’s Central Executive, the highest decision-making body outside of annual conference, has also been rescheduled.

“The JLP is a democratic party and persons are entitled to their opinions. Varying views have been advanced, and all views will contend. No one person’s view will be shoved down anyone’s throat,” Montague told The Gleaner last week, adding that the party was very aware of the saving to be had, as indicated by the Electoral Office of Jamaica (EOJ).

“The JLP and our leader are well known to be frugal, and frugality has been actively encouraged. However, there is a view that there should be no price placed on democracy,” he stated.

Addressing the JLP’s election readiness, Montague said the party remains ahead of its schedule of activities. While not officially named, he said potential candidates for the upcoming polls have been “chosen”, but the process “was only a step away from completion”.

The Central Executive will ratify all candidates given the nod by the Selection Committee.

Both parties would have further candidacy issues to clear up should the decision be made to hold both the general and local government elections simultaneously, as they both have sitting councillors standing by to be parliamentary candidates.

For the JLP, Jason James in St Mary Central; Crystal Lee in St Ann North Western; George Wright in Westmoreland Central; and Homer Davis in St James Southern would have to choose in which election they would stand.

Similarly, the PNP’s Patrick Roberts (St Andrew West Central) and Venesha Phillips (St Andrew Eastern) would have to make such a decision.

Montague and Robinson said they were aware of the situation posed by simultaneous elections, but it could easily be remedied with replacements to be made in the face of “any eventuality”.

A JLP source had told The Gleaner that talks of a two-in-one election would go nowhere.

“That is a smokescreen. Elections can still be held in August, and I believe it will be the general election. The prime minister would make an announcement early August. Five clear days are needed between announcement and nomination day, and a minimum of 16 days between nomination day and election day, but if he is to be taken at his word, we will not have it during an SOE,” the source said, adding, “but remember, the 1976 election was held under an islandwide SOE”.

Section 20, Subsection (4) of the Constitution, however, says, “A resolution passed by the House for the purpose of a definition of a period of public emergency may be revoked at any time by a resolution of that House supported by votes of a majority of all members thereof ... .”

Political historian and former PNP Cabinet minister Arnold Bertram said despite recent polls showing the JLP well ahead of the PNP, he does not believe the party is serious about holding the two elections simultaneously.

“It is clear that the PM faces a dilemma in finding a suitable date for the elections, which would give the JLP some political advantage. One dilemma he faces is that having been elected by just 25 per cent of registered voters in 2016 (48 per cent voter turnout); despite massive spending in the two by-elections, support for the administration continues to decline. In the Clarendon South Eastern by-election, the entire Cabinet threw support behind the candidate, hoping for a 40 per cent turnout, only to receive 18 per cent,” he argued.

The economic crisis caused by coronavirus has dealt a devastating blow to the world economies, including Jamaica’s, Bertram noted, adding that it will impact every political decision made locally.

He does not believe the current political climate favours the JLP having both elections simultaneously.

“Political opportunism is the order of the day, and every attempt will be made to manipulate the Constitution in the hope of securing some political advantage in the timing of the election. It is also my view that there is no fixed position on two-in-one elections. And there is nothing to prevent the prime minister from reconvening the House to end the SOEs for political expediency,” he ended.

Meanwhile, Director of Elections Glasspole Brown said the Electoral Office of Jamaica has been getting things in order for whenever the prime minister makes his call.

“Also, the training is fairly advanced, and our target is to complete it by the end of July,” Brown told The Gleaner.

Brown has suggested that the EOJ would need 32 days between nomination day and election day to properly handle both elections simultaneously.