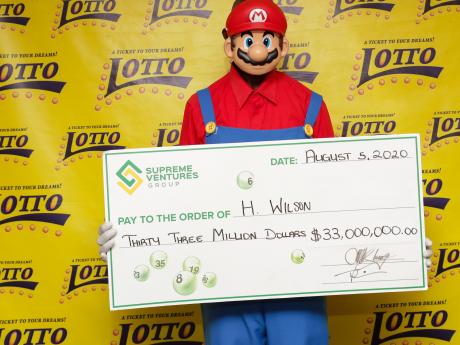 H. Wilson poses with a symbolic cheque of his July 22 lottery windfall.

A painter, who has consistently bought the same lottery numbers for a decade, had his windfall in July, when he won $33 million.

Supreme Ventures announced the winner via a release on the weekend.

He has been identified as H. Wilson.

“I always play those same numbers and print them back for every draw, the exact same numbers. And when I saw the numbers, I couldn't believe I had the exact numbers in the same order as the draw,” said Wilson, who was not aware that he had won until a week later.

“I didn’t know right away, and I was busy, so I didn’t check it until the following Saturday at the terminal,” he said.

He has continued to ply his trade despite his recent fortune.

“I still have jobs all over the place that were postponed due to COVID. I plan to continue working, but I want to take it to the next level and get a pickup and more tools.”

He says while his life before the win was comfortable, he always knew that he would win the Lotto some day.

“I said to myself that I want to win this thing. I’d watch the draw and think how easy it would be to win. I still buy my Lotto tickets since the win with the same numbers, just in case I win again. Those are my numbers, I’m going to die with them,” he chuckled.