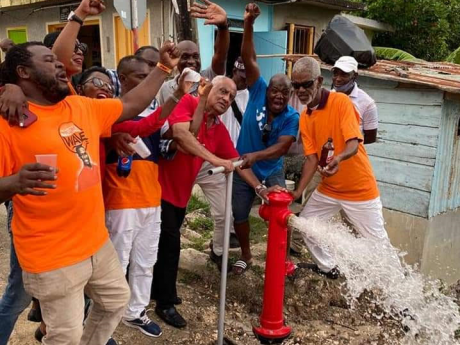 Former Member of Parliament for Eastern Hanover, Dr D K Duncan (centre), flanked by People’s National Party supporters at the opening of a fire hydrant in Jericho in the parish on August 8, 2020.

Questions are being raised about how former member of parliament for Eastern Hanover, Dr D.K. Duncan, and fellow People’s National Party (PNP) supporters were able to open the valve to a fire hydrant in the district of Jericho.

Prime Minister Andrew Holness on Saturday commissioned into service the Claremont to Jericho section of the $400-million water distribution system.

The water supply system, started by Duncan, has been under construction since 2011 and is partially complete.

Shortly after the ceremony, Duncan turned up in Jericho, some three kilometres from Claremont, with a number of PNP supporters, including councillor for the Sandy Bay division in which the project falls, Andria Dehaney-Grant, on the day that Holness was due to commission the first phase of the project into service.

A ceremony was held where a hydrant connected to the water system was turned on by Duncan, much to the cheers of the crowd.

In an interview with The Gleaner, the sitting member of parliament for Eastern Hanover, Dave Brown, expressed concern about the action.

“This is something serious when a man is in retirement and walk out of retirement after five years to come turn on a project that he started, it is so funny. Let’s be fair and talk about it,” Brown argued.

In an interview with The Gleaner ahead of the commissioning ceremony in Claremont, Duncan stated that in his interactions with residents of the areas to be served by the system, they expressed doubt that they will get access to water any time soon.

“So we feel that the timing of this commissioning is purely an election trick, and I am very sad that it has come to this,” he stated.

“I was really hoping that it would have been done before, even during this member of parliament’s time, but I am very sad about seeing it being used as an election tool because if they say that water is life, then I do not think that you should play with life,” he argued.