‘We are dying here’ - Top Coffee Grove cries for water 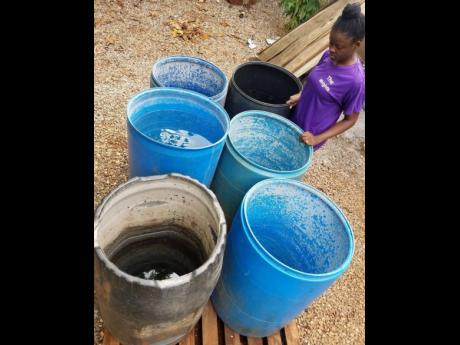 Veniesha Daley-Wright was at her wits’ end when she took to social media this week to make an impassioned plea for water on behalf of her district of Top Coffee Grove in Porus, Manchester.

For the past five weeks, the teacher said that she, along with her neighbours, has been without water in their pipes even as they continue to receive bills from the National Water Commission (NWC).

She said that those who could afford it had to purchase water from private sources, paying up to $400 per drum, with an average need of at least six drums per week for basic household use.

“There are six of us in my household. I bought seven drums of water last week Thursday and I am down to two drums today. The last time I took a shower was when I went to YS Falls on Sunday. At home, I have to use bath pan to bathe and I cannot throw out that water when I am done because I have to use it to flush the toilet. That is how bad it is,” Daley-Wright told The Gleaner.

She said the scarcity of the commodity, coupled with the coronavirus pandemic, has been causing her anxiety over her elderly parents and two small children.

“We are dying here. Thank God for the rain. If it isn’t for the rain, we wouldn’t be able to wash. When we buy the water, we can’t wash from it because the washing machine takes a lot, and we still can’t hand-wash everything,” she said.

The teacher complained that tor years, households at the top of hill rarely ever get water, unlike those at the lower level.

“I don’t see how water can be at an area a mile from where I am and I am not getting water,” said Daley-Wright. “I have been in dialogue with persons from NWC and I hear that the pumps are working, but there is an issue with the float … . I don’t understand how water can be pumped from Porus to Mandeville and not from Porus to our community.”

She said that her pleas to Councillor Mario Mitchell have fallen on deaf ears, and when tanks were recently distributed, none were given to residents at the top of the hill who were most affected by the crisis.

Mitchell told The Gleaner that he had received no recent report that the area was without water, adding that a few months ago, he made contact with NWC and that issue was resolved. He said he would re-engage the commission for an alternative solution.

NWC Corporate Public Relations Manager Andrew Canon told The Gleaner that the current water system was developed by the Rural Water Supply Ltd and had major deficiencies from the start.

He said that the NWC’s maintenance team was now investigating the specifications for a pump that can carry water to the highest point.