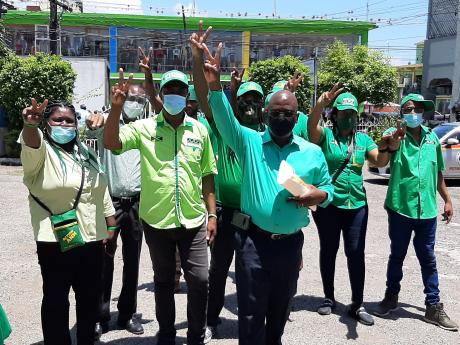 George Wright, councillor for the Petersfield division in the Westmoreland Municipal Corporation emerged out of the nomination centre as the duly nominated candidate for the Jamaica Labour Party (JLP) in the constituency of Westmoreland Central.

He was escorted from his Rose Street constituency office in Savanna-la-Mar to the Central Tabernacle Deliverance Central on Great George Street by a group of green-clad JLP supporters and says he is confident of taking the seat this time.

Wright, who lost his bid to win the Westmoreland Central seat in the 2016 general election by 1,179 votes against the incumbent Dwayne Vaz of the People's National Party (PNP) says he will be banking on the fact that the JLP currently has control of four of the five parish council divisions in the constituency.

"In 2016 we went in without a councillor. We now have four sitting councillors, who are hardworking councillors. They (people of Westmoreland) have seen the work we have done in the last three years and they are willing to come out and vote for me and the Jamaican Labour Party, " Wright told The Gleaner after submitting his nominations papers and paying the required deposit.

On his second attempt, he said he is confident that the JLP will be victorious this time around.

The JLP last won the politically tough Westmoreland Central seat in the 1983 snap election under its' then-leader Edward Seaga, who had previously won the 1980 general election.