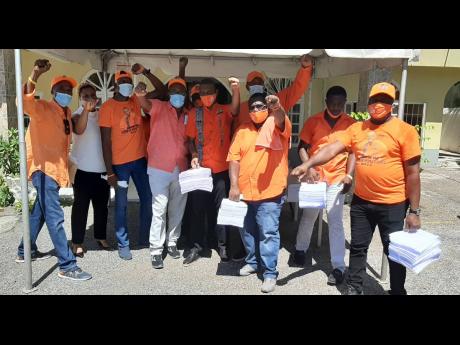 Contributed
Dwayne Vaz (centre), People’s National Party candidate for Westmoreland Central, clutches a copy of the voters’ list containing the names of the 43,889 qualified voters in his constituency.

Come September 3, Westmoreland Central will be one of the so-called battleground seats that the ruling Jamaica Labour Party (JLP) and the Opposition People’s National Party (PNP) will be targeting. However, it will not be a straight fight between the two as two independent candidates have joined the fray.

On nomination day, the incumbent member of parliament, the PNP’s Dwayne Vaz; the JLP’s George Wright; attorney-at-law Don Foote, representing the Jamaica Abolitionist Movement (JAM); and businessman Torraino Beckford were all duly nominated, paving the way for them to seek majority support among the 43,889 persons registered to cast their votes in the constituency.

Like most of the incumbents who are seeking to remain in the House of Representatives, Vaz is oozing with confidence in what many pundits expect to be a tough battle.

“We are going into the general elections as favourites, even though we lost four seats in the local government elections (of November 2016). If you check the numbers, you will see that we still would have won the constituency if it was a general election,” said Vaz.

“We are not overly concerned as we have done the work to ensure that what happened at that time will not happen again,” said Vaz in reflecting on his 2016 win, in which he defeated the same JLP challenger by 1,179 votes.

However, an equally confident Wright, who is the sitting councillor for the Petersfield division in the Westmoreland Municipal Corporation, said he fully expects to turn the table on Vaz.

“I am looking at securing about 13,000 votes from the 43,889 eligible electors on the voters’ list in the constituency,” said Wright. “I believe in development, and there are a lot of things missing in the constituency. People want road, light, water, and jobs. Most of our youths are unemployed, and I’m ready to lobby for an organisation in Central Westmoreland that will create jobs for the young people.”

While it seems a safe bet to predict that none of the two independent candidates will win, Beckford, who is contesting his second general election, having polled 47 votes in 2016, is hoping that come September 3, something miraculous will happen for him.

He said his mission is a simple one as it revolves solely around reviving commercial activity, creating jobs for the jobless, and addressing the infrastructural needs of the constituency.

“I don’t have a well-funded campaign, but the difference is about you showing up at the polling station and voting for me. I want you to come out and represent me because I can be the difference that this constituency needs,” said Beckford in an appeal to the constituents.

The controversial Don Foote, who contested the seat in the past for the JLP, said his mission is to apply pressure to the political structure to bring change to the parish and the country in general.

Although not sharing much of a plan for the physical development of the constituency, Foote said he wants to use the platform to gather enough signatures to petition United States President Donald Trump to exonerate National Hero Marcus Garvey of all criminal charges and convictions.