‘Ven is our voice’! - Goldsmith Villa says outspoken councillor will be a godsend MP! 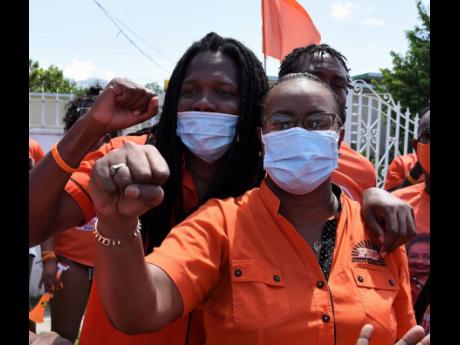 When Venesha Phillips decided to suspend campaigning for the afternoon because of heavy rains three weeks ago, supporters of the People’s National Party (PNP) bastion in the battleground constituency of St Andrew Eastern would have none of it.

“You mad! Ven is our voice. Nobody stands up for this community like Venesha Phillips. She always answers her phone. She deserves to be member of parliament (MP), especially as we only see the current MP Fayval Williams on television,” said Donnett Barnett, one of scores of persons who came out in endorsement in pouring rain.

She was on the roadside of a recently paved stretch of road in the Papine division of the constituency.

That affection was openly displayed by hugs and nods of approval, shouts of ‘yeah man’, ‘our queen dat’ as the outspoken councillor walked the community rallying support for her September 3 bid to become MP.

It was also clear that the affection was mutual.

Phillips is one of 12 women the PNP has offered to the 1.9 million electors for higher office in the September 3 general election.

“These are my people. All persons in the constituency are my people, whether they support me or not. But I have to say that I am very encouraged by the support I am receiving from residents in some communities who would not normally say anything,” Phillips told The Gleaner during the campaigning.

Eighty-one-year-old Ivan Stewart, who carefully trudged up the hill from his yard located in a settlement below the height of the road, said he came for a hug.

“A just come out to meet you. A know who you is. But a just want you to know that I am here to support,” Stewart told her in earshot of The Gleaner team watching her campaign.

Apparently not a man of many words, he received his hug, and headed back down to his yard. Scores of children, teenagers and young adults were also on the road to meet her. They all called her Ven, and she responded to young and old.

Keisha Dixon and her two young girls, aged five and three years, joined the walk with Phillips and no one seemed to mind the heavy downpour which lasted about an hour. None of her workers left her campaign either.

Salome Kerr thanked Phillips for her efforts in securing paved roads for about 200 metres of roads in the section of the community.

“It is not perfect, but I am grateful. We are grateful. For now the taxi drivers will come on it and so you won’t have to walk too far, especially when there is violence,” she told The Gleaner.

Kerr raised concerns about water for the community. Some residents said pipes were laid during the tenure of Colin Campbell as MP, but years later the closest they have come to water is access from a pipe nearby.

“Life is a little better with the pipe there, and we are glad for the roads,” she said.

Phillips said a lot of progress in sections of the constituency is being missed as a result of violence, a state of affairs she blamed on lack of employment opportunities and too many guns and too many idle hands. Tit-for-tat crimes, she said, was causing mayhem in the area, but she vows to devote time to community and personal development programmes where majorities in need can benefit.

A diverse constituency of social, economic and political backgrounds, it is also houses both The University of the West Indies and the University of Technology. The economic disparities are stark, and differences are not lost on her.

She believes the constituents are not likely to stand for foolishness from it representatives, and possibly accounts for the change of representatives in the last two elections.

Phillips hopes to become a multiple-term MP for the constituency. On Tuesday when she was nominated, a large group came out in a show of support.

“The work continues,” she said.