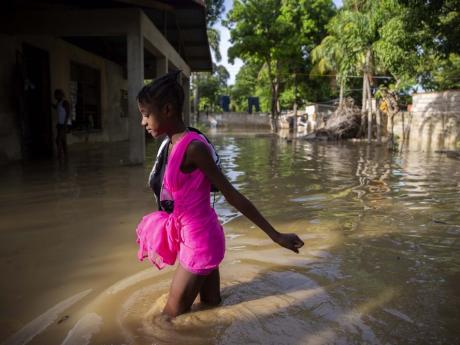 A girl wades towards her flooded home the day after the passing of Tropical Storm Laura in Port-au-Prince, Haiti on Monday. Laura battered the Dominican Republic and Haiti on it's way to the US Gulf Coast. The death toll in Haiti has now risen to 31. Eight other missing people are presumed dead (AP photo).

(CMC): Haiti has raised the death toll from the passage of Tropical Storm Laura last weekend to 31 and said that eight people are still missing. They are presumed dead.

The Ministry of the Interior and the Economic and Social Assistance Fund has been distributing supplies, including mattresses, materials for repairing homes, as well as food kits to more than 800 families in Cité Soleil, Gressier and Tabarre  in the Western Departments, as well to those affected in the South-Eastern Departments of Anse-in-Pitres and Cayes-Jacmel.

Earlier this week, the Directorate of Civil Protection (DPC) had put the death toll at 20 with at least five others reported missing. The DPC, in a partial report, said that the deaths occurred in the south-east, west and south departments.

But in its latest report, it said 31 people had died, eight were missing and eight others have been injured.  It said a total of 2,320 houses were damaged, 6,272 were flooded and 243 others destroyed

Civil Protection volunteers continue to clear and clean public spaces, including streets blocked by trees that fell during the storm, and the authorities said that a reconnaissance flight, coordinated by the National Emergency Operations Center, has revealed the extent of the damage in the West and South-East.

“In the field, in-depth assessments, primarily in the agricultural sector, are continuing in these two departments but also in the South, with the support of several national and international partners,” the DPC said, extending its sympathies to the families affected by the storm.,

It said it also wanted to remind the population of the need to maintain caution, “especially since we are only in the middle of the hurricane season."

Tropical Storm Laura grew into a powerful Category Four hurricane — the second-highest level — as it moved across the Gulf of Mexico and on Thursday. It struck Louisiana, killing six people, but causing much less damage than expected.