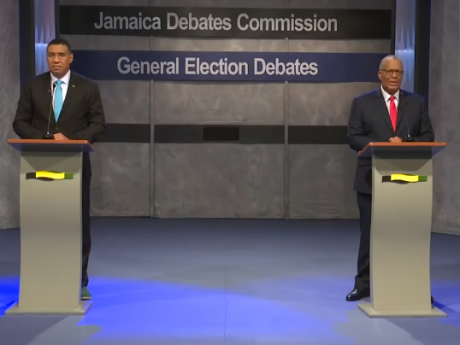 Both of the nation's political leaders have committed to implementing legislation to fix election dates if their parties are elected to form the next government.

The two were sparring in the General Election Debates organised by the Jamaica Debates Commission at the Creative Production and Training Centre in the capital, Kingston.

Opposition Leader and president of the People's National Party, Dr Peter Phillips, to whom the question was posed by a member of the public via social media, said he his government would move to develop the legislation to implement fixed election dates. He chided the Jamaica Labour Party (JLP) administration for not making good on its commitment to move the legislation forward or to implement impeachment laws, as well as create job descriptions for ministers.

"The failure to provide job descriptions resulted in the worst wave of corruption behaviour and thievery in government that this country has seen in the entire post independence history," he said.

Rebutting Phillips, Prime Minister and leader of the JLP, Andrew Holness said fixed elections dates remain an aspiration for his government; and also the holding of a grand referendum on the buggery law and the decision to make the Caribbean Court of Justice the nation's final appellate court.

Defending the non-implementation of job descriptions for ministers, the prime minister said ministers have been asked at each cabinet retreat to develop work plans on which they are appraised.

"And in addition to that, you may not know, but we have put in place a training system where our ministers participate in training in public affairs management and good governance. So we have done far more than a job description on a piece of paper," he insisted.

"We have put that into action and you have seen the results," he said.