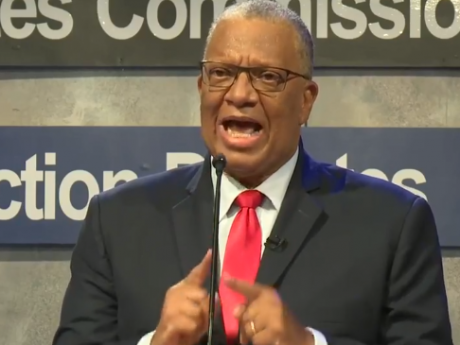 President of the People’s National Party (PNP) and Leader of the Opposition, Dr Peter Phillips, says he will commit to increasing the gender mix in the upper house to 50 per cent in the next Senate he appoints.

“We have said that we believe that there needs to be at least 50 per cent representation both in the House of Representatives and in the Senate,” Phillips initially responded during the leadership debate, which ended a short while ago at the Creative Production and Training Centre in Kingston.

But pressed for a “yes” or “no” from journalist, Dionne Jackson Miller, Phillips said “yes”, women would make up at least 50 per cent of the slate of senators he appoints.

Prime Minister Andrew Holness, in response, said the Jamaica Labour Party (JLP) had recruited more women and has presented more women on its slate of candidates than the PNP.

A total of 96 men are being fielded as candidates for seats in Gordon House this year – 45 for the ruling JLP and 52 for the opposition, PNP.

On the PNP side, 17.5 per cent of the 63 candidates are women. In the 2016 elections, the PNP had 13 women on its team, but this time around, there are only 11 women from the PNP vying for Gordon House.