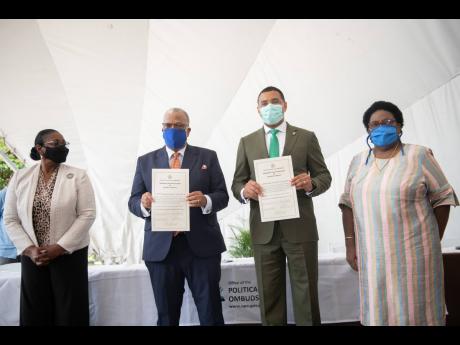 Political Ombudsman Donna Parchment Brown has given the assurance that her office remains fully operational and committed to carrying out its mandate, despite the fact that she has contracted the coronavirus.

Parchment Brown told The Gleaner yesterday that she underwent a test last Wednesday and received the COVID-19-positive result on Sunday, prompting a deep-cleaning of her offices yesterday. However, she indicated that she and her staff have been working from home since last Thursday.

Operating under constraints of the pandemic has changed the way they operate, but it has not lessened the office’s effectiveness, Parchment Brown insisted.

“The way we manage our work in the context of the technology and how things are done is we may get a social media post, a call from somebody or we may get an email or we may get a written complaint from persons involved in the political process. We monitor all of those social media [posts] as well as the reports we get and the complaints,” she told The Gleaner.

The face-to-face interaction is a thing of the past, although the process of verification of complaints remains just as rigid, using technology – social media, email, virtual or telephone meetings or letters – to get the job done.

“We are using anything at our disposal to stay on top of what is happening. Essentially ,we don’t have to go to a physical location to address the problem. So, for example, there were some issues somewhere in the Red Hills area of St Andrew and I had a virtual meeting with the two candidates and was able to talk through what the issues were,” she explained.

In fact, the Office of the Political Ombudsman has received reports about two large motorcades in Manchester over the weekend.

“We are particularly concerned,” Parchment Brown admitted, “and the police have been working with us on that.”

She said that the police have been very supportive, especially through the 20 Jamaica Constabulary Force political ombudsman liaison officers covering all police divisions.

The general secretaries of both major political parties have also been very helpful, she said, in terms of reaching out to the candidates implicated in alleged breaches of the political process.