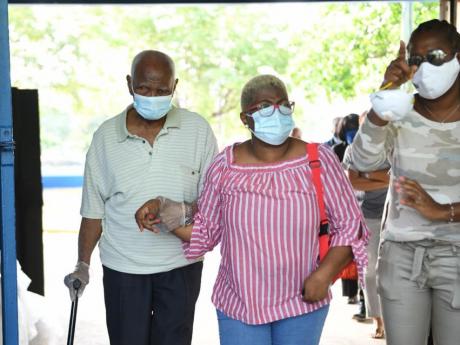 Osbert Neufville, 83, being assisted by his daughter Cheryl into the polling station at Mona High in St Andrew Eastern on September 3, 2020 - Gladstone Taylor photo.

The elderly are particularly vulnerable to the coronavirus but the dreaded disease was not going to stop Osbert Neufville from voting in today's election.

The 83-year-old, with his cane and daughter's help, made his way onto the grounds of the Mona High School in St Andrew Eastern in time for the 7 o'clock opening of polls.

"Since universal adult suffrage, I have seized every opportunity to exercise my franchise and this is one of the times I said I don't want to miss out. Despite the challenges I must come and cast my vote," said the Mona Heights resident.

Voting is an important act in the Neufville family and Cheryl was proud to be joining her dad in maintaining the tradition.

"We always try to exercise our constitutional right to vote," she said, "because if we don't vote, we really shouldn't be commenting about anything. We have the right to help determine our future."

It was a similar story for Paula McBean on why she turned out.

"It was very messy but I did it," said one of the early voters, pointing to her ink-stained finger.

She didn't want to be named.

Long, snaking lines were observed well before the polls opened in the St Andrew Eastern constituency where Fayval Williams of the ruling Jamaica Labour Party (JLP) is fighting off the challenge of Venesha Phillips of the People's National Party (PNP).

A quiet, near sombre mood dominated the atmosphere only disturbed by the instructions of election day workers.

Despite a Gleaner-commissioned Don Anderson poll giving Williams a 13-percentage point lead, pundits are expecting a much closer affair.

Before voters filtered to their various polling stations, they had to do the now customary hand sanitising at a drum-based water fountain.

There appeared to be strict compliance with the wearing of masks.

Gleaner columnist Dr Carolyn Cooper was taking no chances and ensured she was fully covered.

Prime Minister and JLP leader Andrew Holness is expected to cast his ballot at the polling station later this morning.