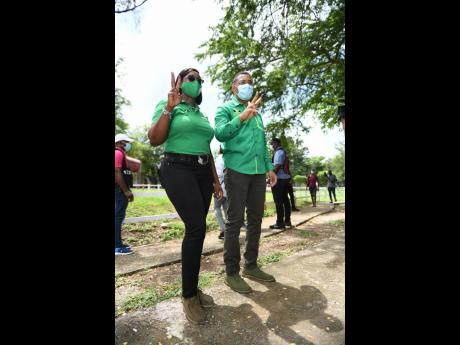 Prime Minister Andrew Holness says he's expecting his Jamaica Labour Party (JLP) to win at least 40 seats today, as he admits a defeat would be a shocking result based on feedback from Jamaicans.

Holness is maintaining that while his administration could have done more, enough has be done for Jamaicans to keep his party in power.

Holness, who has previusly shied away from commenting on seat projections, said 40 seats would be "in the zone" of the number of seats being targeted.

A senior party official had told The Gleaner from Sunday that the party is expecting between 37-42 seats, the latter would give the party a crucial two-thirds majority in the House of Representatives and enabling it to make constitutional changes at that level without Opposition support.

The JLP is defending 34 seats in today's poll.

"It's going as expected. From what I've observed, I got a brief this morning, there were long queues and some issues with machines. I've been briefed that the Electoral Office is working assiduously to ensure that the lines move very quickly because what we don't want, is people standing in line for any extended period of time," the Prime Minister told journalists after he arrived with his wife, Juliet, to vote at the Mona High School in the St Andrew Eastern constituency.

"Everyone so far has been wearing masks when they enter the polling stations ...election day seems to gotten off to a smooth start."

The 48 year-old is seeking to lead the JLP to it's first consecutive contested General Election win since 1967 and he's confident he'll get it done.

"Of course, course. We all go into elections expecting to win," he replied when asked if he'll be shocked if the JLP loses.

"I think we have made a good case about performance. I've always had to reflect on this that the electorate does not always vote on performance, choices are not always made rationally and at the end of the day, I've observed especially in this election, that people are always looking at 'what is in it for me' and thats quite legitimate," he explained.

"I have no response to that. That's his decision," Holness said when asked to comment on news from People's National Party (PNP) president Dr Peter Phillips that he would retire from representational politics if his party loses.

The Holness couple, in party branded shirts and the familiar Clarks footwear, arrived just after 10:30 a.m., well after his team advised he was scheduled to cast his ballot.

Although the Holnesses voted in the JLP-leaning Mona Division of St Andrew Eastern, the Prime Minister is seeking re-election as a six-term Member of Parliament for St Andrew West Central.

His wife, Juliet, is seeking her second term as representative for St Andrew East Rural.

Holness won the seat in 2016 by 2,064 votes to continue to defy the PNP's Patrick Roberts.

Most polls have predicted that the JLP is on course to win today's parliamentary elections.

Pollster Don Anderson has predicted that the JLP has 28 'comfortable' seats to 23 for the Dr Peter Phillips-led PNP.

The JLP would therefore only need four of the 12 marginal seats that he's identified.