#JaVotes2020 | Phillips to retire if he loses election 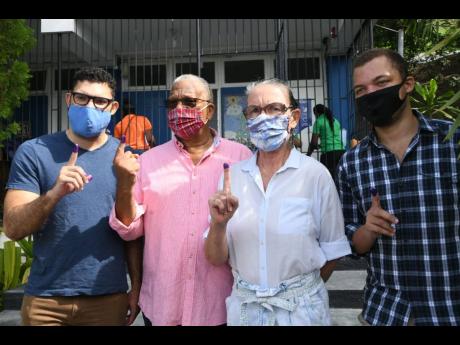 Rudolph Brown
Dr Peter Phillips (second left), Leader of the Opposition and President of the People's National Party, accompaied by his wife Sandra Minitt-Phillips (second right) and their two sons Jacob (right) and Luke, show their fingers after casting their votes at polling division 34 and 35 in the St Andrew North Central constrituency on election day at Reach Academy in Barbican.

Leader of the Opposition and President of the People's National Party (PNP), Dr Peter Phillips, has again expressed confidence that the 82-year old party will snatch victory from the ruling Jamaica Labour Party.

Speaking with reporters at the Reach Academy institution at Widcome Road in Barbican, where he voted a little after 9:00 a.m., Phillips said if the PNP wins, the first order of business would be to name a Cabinet immediately.

Asked if he would shut down the country to contain the spiralling COVID-19 cases, Phillips said that nothing is off the table.

However, Phillips said that if he lost at the polls today, he would relinquish the leadership of the party and retire from representational politics.

Phillips voted in St Andrew North Eastern at Polling division 35, where incumbent Delroy Chuck says he is confident of victory.

Sandra-Minott Phillips, the PNP president's wife and his sons Luke and Jacob also accompanied him.