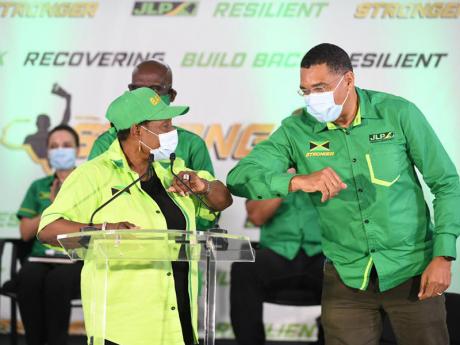 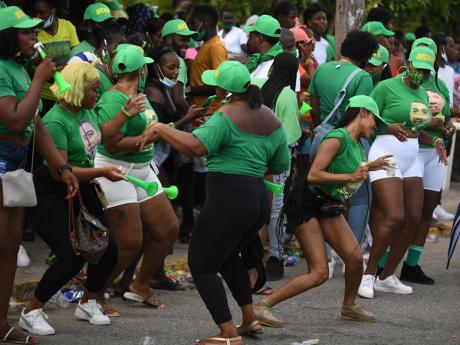 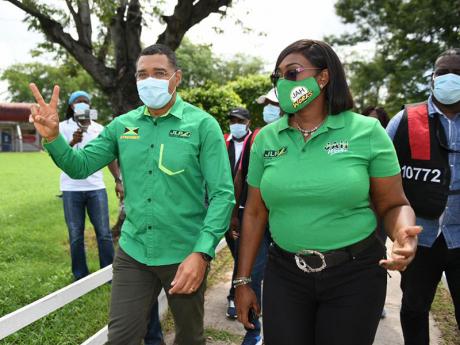 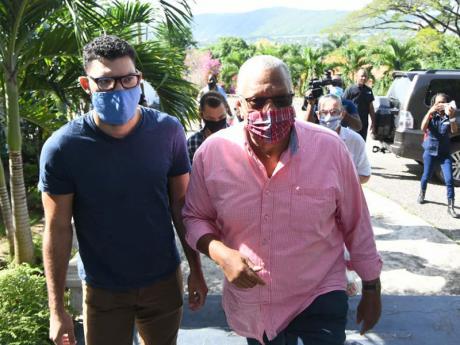 Leader of the Opposition and president of the People's National Party, Dr Peter Phillips (right), and family, sons Luke (left) and Jacob and wife Sandra Minott-Phillips make their way to cast their votes at the Reach Academy in Barbican. Rudolph Brown/Photographer 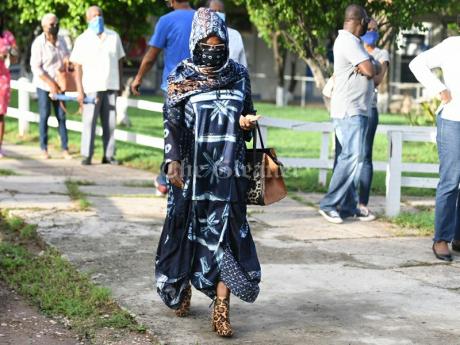 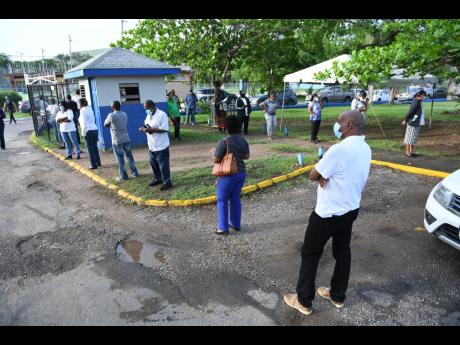 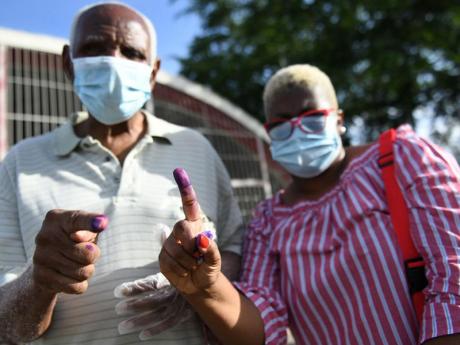 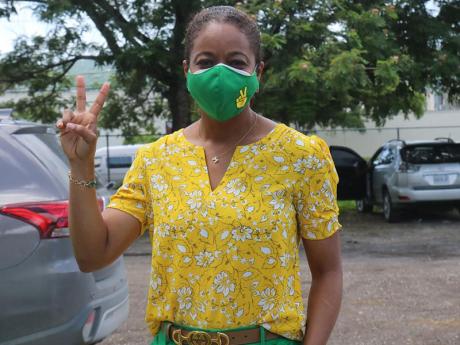 10:40 PM: Winning 49 seats in the preliminary count, the Jamaica Labour Party (JLP) was returned to office in today's general election with a landslide victory, as the People’s National Party (PNP) only managed to garner 14 seats of the 63.

9:10 PM: Thirty-five seats have been declared for the JLP and 14 seats for the PNP. The counting continues.

5:30 PM: Juliet Cuthbert-Flynn, the incumbent for St Andrew West Rural, said several voters had issues locating their polling station, marring what was otherwise a very smooth election process in the constituency. “I find that there are some issues with voters finding out where they vote, so Electoral Office really needed to fix that because persons are not finding where they are to vote,” said Cuthbert-Flynn who is hoping for a second term.

4:00 PM: The PNP's Patrick Roberts is, for the fifth time, seeking to become member of parliament for St Andrew West Central, where JLP Leader, Andrew Holness, is the incumbent. Asked if he expects to lose, Roberts declared,  "I'm always a winner. Whatever happens, I'm a winner."

3:30 PM: COVID-19 required social distancing be damned, dozens of Labourites started a massive party on Olympic Way, St Andrew, which they expect to culminate with a JLP election win this evening. "Me waah Andrew fi win; me nice clean Prime Minister," said Kievakay Barrett, 27, as she danced to the latest beat with her neighbour, Aiquila Roberts.

2:00 PM: According to the Electoral Commission of Jamaica (ECJ), a total of 30.67 per cent of eligible electors have voted up to 2:00 PM. This based on reports coming from 89 per cent of the polling stations across the island. The voter turnout at 3:00 PM during the 2016 General Election was 39.94%.

1:30 PM: PNP candidate for South East St Mary, Shane Alexis is barred from entering the grounds of a polling station at Annotto Bay High. Alexis attempted to enter through the main gate at the school, which was being manned by the police and election day workers but was blocked by a group of JLP supporters.

11:05 AM: Marlene Malahoo Forte, the JLP incumbent member of parliament for St James West Central, blamed the delays in the polls on the cadre of newly recruited election day workers. "The additional steps being taken to control COVID-19, they have slowed the process a little more, but behind that, there appears to be a lot of presiding officers and poll clerks who are very new at it and that too is causing a little slower process," the JLP candidate said. 10:30 AM: Prime Minister Andrew Holness says he's expecting his JLP to win at least 40 seats today, adding that a defeat would be a shocking result based on feedback from Jamaicans.

When asked to comment on news from PNP president Dr Peter Phillips that he would retire from representational politics if his party loses, Holness said he had no response to that. "That's his decision," Holness said.

10:00 AM: Three-time voter, Conroy Thompson, of Trelawny Northern says he set out on election day to vote for the constituency’s independent candidate, Genieve Dawkins, even though he did not yet know her name. “The two major political parties, over the years, I have seen how they have mismanaged the resources of this country.  I wasn’t going to vote at all, but when I heard that there was an independent candidate on this ticket, I decided to get up and be a part of the process,” he said when The Gleaner caught up with him.

9:00 AM: Leader of the Opposition and president of the PNP, Dr Peter Phillips, has again expressed confidence that the 82-year old party will snatch victory from the ruling JLP. However, Phillips said that if he lost at the polls today, he would relinquish leadership and retire from representational politics.

8:00 AM: A woman fainted this morning at a polling station at the Mona High School in St Andrew as complaints about the slow pace of voting began to rise. An Electoral Office of Jamaica worker confirmed the incident along with several potential voters who said that they witnessed what happened.

7:45 AM: There is disgruntlement at the Charlemont Community Centre in Linstead, St Catherine, as voters complain about the slow pace at which the line for voting is moving.  Among the electors complaining is a 78-year-old woman. She tells The Gleaner that she is yet to have breakfast and had been waiting in line before the polling station opened its doors. "A from after six mi out here, and mi leave mi likkle grandson at home. Mi or him nuh eat yet. It look like a one person a work because dem claim say election worker short or nuh reach yet," she says. IN PHOTO: Gleaner columnist Dr Carolyn Cooper is all covered up as she heads to the polling station to cast her vote.

7:30 AM: Gleaner columnist Dr Carolyn Cooper took no chances as she made her way to the Mona High polling station to cast her vote.

7:00 AM: Voting has begun at 6,984 polling stations across the island. There are 1,913,410 registered electors on the voters' list. A total of 139 candidates have been nominated to contest today's general election. Of this number, 31 are women and 108 are men. ​The country's two leading political parties, the JLP) and the PNP, both have a full slate of 63 candidates contesting the election. The JLP is seeking a second consecutive term in office. Nothing could stop Osbert Neufville from votingin today's election. The 83-year-old, with his cane and daughter's help, made his way onto the grounds of the Mona High School in St Andrew Eastern in time for the 7:00 a.m. opening of polls. "Since universal adult suffrage, I have seized every opportunity to exercise my franchise and this is one of the times I said I don't want to miss out. Despite the challenges I must come and cast my vote," said the Mona Heights resident.

WATCH: The live stream of the results tonight here

5:00 AM: Vehicles line both sides of the road outside the Electoral Commission of Jamaica, located on Duke Street in downtown Kingston, as staff prepare for today's 18th general election. The Electoral Office of Jamaica says it has implemented strict protocols to reduce the possibility of COVID-19 transmission.