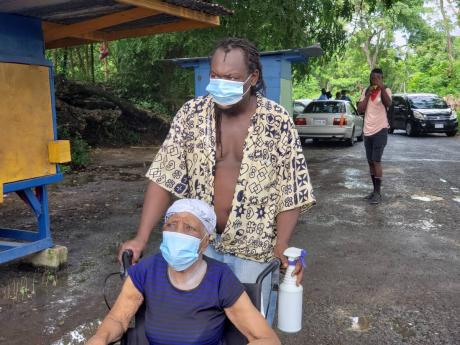 Contributed
Dorothy Lee of Port Morant, St Thomas, is wheeled into the polling division by her son-in-law, Richard Johnson.

FORTIFIED BY a mask and a bottle of alcohol used as sanitiser, 106-year-old Dorothy Lee of Port Morant, St Thomas, was wheeled in a chair into the polling division of Port Morant in St Thomas.

Despite the heavy rains and desperate warnings from her family to stay home because of the health dangers posed by COVID-19, which has been racking the parish over the last few weeks, the centenarian was adamant that she would play her part in the re-election of Dr Fenton Ferguson to the St Thomas Eastern seat.

Up to Wednesday, St Thomas had recorded 268 cases of COVID-19. Five communities within the parish were placed under quarantine last month in an effort to slow the spread of the virus.

All restrictions were lifted before yesterday’s elections.

When The Gleaner approached the elderly woman to enquire of her reason for braving the weather and health storms, Lee began trembling uncontrollably. However, she managed to share her age and who she had voted for.

Her son-in-law, Richard Johnson, revealed that the woman’s reaction was based on the fact that she is deathly afraid of COVID-19, but she eagerly requested to support the incumbent MP based on his interest in her well-being.

According to Johnson: “Fenton come check her weh day and give her a new wheelchair. Him always visit on her birthday, and we asked him for the wheelchair, and he assisted us with it. Also, whenever she need anything health-wise, and we can find him, he always supports her in whatever way he can. So she said she’s showing her support, so we carry her out.”

Johnson told The Gleaner that his spouse tried her best to dissuade her elderly mother from leaving the house but also wanted to honour her request.

“Her daughter was telling her that it doesn’t make sense, and she kept saying she will always support who support her, and because we never ever want to do anything to make her feel uncomfortable, especially at this stage in her life, we just say all right,” he said.

“We fraid of it (the virus) bad, so we spray out the car that come for us and ensure everything clean before she reach in. We gave her a mask, and I was trying to put on gloves on her, but because her hands can’t really flex, we just decided to take a sanitiser instead,” he said, adding that he also tried his best to keep her out of the crowd as much as possible.

The 106-year-old woman was one among scores of senior citizens who had come out to exercise their right to vote despite earlier guidelines by the Government advising them to stay in as much as possible due to the threat posed by the global health pandemic in the country.