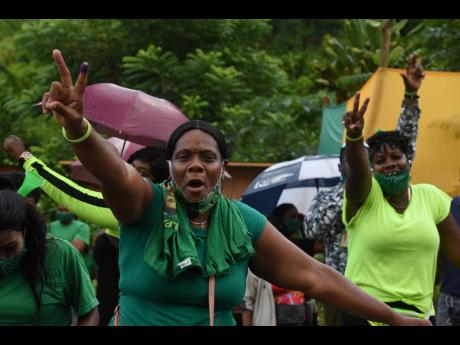 OLYMPIAN Juliet Cuthbert-Flynn sprinted to a second term as the member of parliament (MP) for St Andrew West Rural after securing more than 3,000 more votes than her contender, the People’s National Party’s (PNP) Krystal Tomlinson.

Cuthbert-Flynn polled 8,534 votes to Tomlinson’s 5,452. The second-term MP said she intends to work harder as she focuses her energy on improving water, road and general infrastructure in the constituency.

“I am so happy that the people saw the work and felt the need to re-elect me,” she said as it became apparent that she had swung the traditional ‘swing seat’ in her favour for a second time.

She had sent the PNP’s Paul Buchanan packing following the 2016 general election. The former Olympian had secured 2,098 more votes than her challenger, after securing 9,736 votes to his 7,638. Andrew Gallimore of the Jamaica Labour Party (JLP) won the seat in 2002 and 2007 before he was tossed out in 2011.

Cuthbert-Flynn was confident of victory yesterday as she traversed the constituency, although she was peeved about reports that some voters in the Stony Hill division were facing challenges locating their polling station. The division is considered a JLP stronghold and contributed 3,171 votes to Cuthbert-Flynn’s overall win in 2016.

“I find that there are some issues with voters finding out where they vote, so Electoral Office (of Jamaica) really needed to fix that, because persons are not finding where they are to vote,” said Cuthbert-Flynn.

She was pleased with the voter turnout, which she found was OK, despite a spike in COVID-19 cases and intermittent rain, which, at times, lashed sections of the constituency.

“I am feeling good,” she said, just a few minutes before polling ended.

Newcomer Krystal Tomlinson was hoping to endear voters with her promise to increase access to water, improve Internet connectivity, and provide more financial assistance to students.

“My goal for youths surrounds training and stipend-driven programme, that while you are studying, you can have a stipend,” she told The Gleaner earlier in the day.

One young voter had declared, however, that Tomlinson seemed more focus on improving the livelihood of farmers. The former PNP Youth Organisation president had vowed to protect the interests of coffee farmers in the constituency.

“She (Tomlinson) is talking about farming and things that are not appealing to us young people, because I don’t want to become a farmer. My father was a farmer, my great-grandfather was a farmer, and my grandmother. I want to be something else,” said 20-year-old Stacey-Ann Myers, who defied the traditional tendency of residents in Brandon Hill and cast her vote for the JLP.