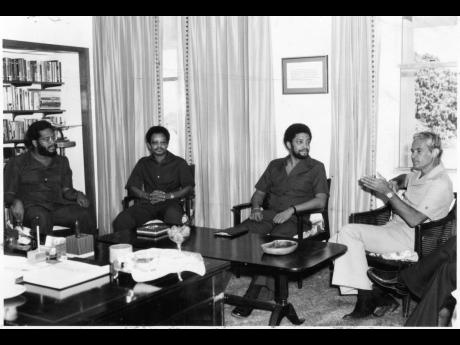 Gleaner photograph
In this Gleaner file photo, then Jamaican Prime Minister Michael Manley (right) is having talks with Leader of the Opposition Socialist New Jewel Movement of Grenada, Maurice Bishop (second right). Also seen are two other Opposition members of the Grenada Parliament (from left) Bernard Coard and Unison Whiteman. 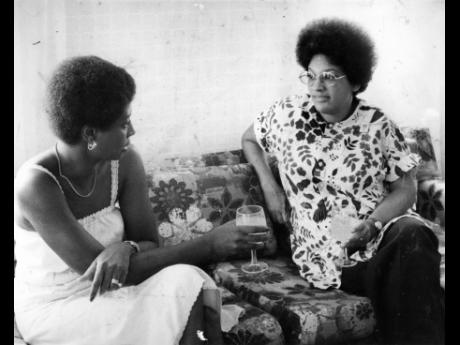 File
Beverley Manley (left) and Phyllis Coard having a chat in their early days in politics. 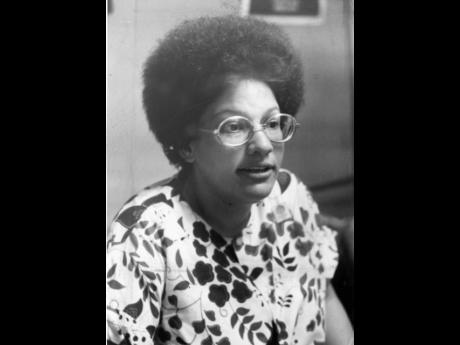 Phyllis Coard’s name has been indelibly linked to Caribbean political history, Lord Anthony Gifford said of the Jamaican who was the lone female among 17 sentenced to lengthy jail terms for the assassination of Grenadian Prime Minister Maurice Bishop in October 1983.

Bishop and 10 others, including his father and Cabinet minister Jacqueline Creft, were killed in a violent coup on October 19 that year.

Bernard Coard, a childhood friend of Bishop, declared himself prime minister. His wife Phyllis was thrust into more prominence on the island, but it would be short-lived, as six days after Bishop’s assassination, a United States-led, Caribbean-assisted invasion ousted the Coard regime.

Operation Urgent Fury unfolded on October 25, 1983 and lasted until December 15 that year.

Phyllis Coard was sentenced to death, but it was never carried out.

Last week, on September 6, the revolutionist died in a Kingston hospital in Jamaica at age 76, following her release in 2000 on compassionate grounds for cancer treatment.

Sunday Gleaner sources revealed that Jamaican authorities were resisting efforts by current Grenadian Prime Minister Dr Keith Mitchell to have her returned to jail on the tiny Caribbean island referred to as the spice isle.

“It is believed that the actions of the Coards and a small leftist minority in Bishop’s New Jewel Movement (NJM) were integral to the US-led invasion following Bishop’s assassination,” Gifford told the Sunday Gleaner.

In September 2009, Bernard Coard was freed along with several others for their part in the coup by the then government of PM Tillman Thomas, leader of the National Democratic Congress.

During the time of their imprisonment, the Coards’ three children were repatriated to Jamaica where they were raised by friends of the family. Their repatriation was made possible through intervention by late former Prime Minister Edward Seaga, on the request of locals closely associated with the family, Sunday Gleaner was told.

Former journalist and women’s advocate, the late Elean Thomas, was tasked to bring them home. Thomas – who was once married to Gifford – brought the two girls and boy to Jamaica, the eldest then about 12 years old and the youngest, a boy, four years of age, recalled retired University of the West Indies (UWI) Professor Rupert Lewis.

Paulette Chevannes – widow of Professor Barry Chevannes who were neighbours of the Coards when they resided in Jamaica – was an integral part of an extended family who helped with the children’s upbringing – Sunday Gleaner was told.

The girls were accepted at St Hugh’s High School with no fanfare and they “blossomed and did very well”. Some of Phyllis’ family members, locally and overseas, also made significant contribution to their life in Jamaica.

SHE GAVE SO MUCH TO OTHERS

“We lived on University Close, College Common in the 1970s along with the Coard family, the Chevannes, Robothams and Munroes, so our children knew them as Uncle Bernard and Aunt Phyl. Phyl was special, genuine and gave 100 per cent to all her pursuits, especially to the Grenadian people and her students at UWI. Maureen (Warner-Lewis) remembers her warm personality and cheerful spirit. “We grieve the loss of someone who gave so much to others,” read a note from Rupert and Maureen Lewis, now both retired professors.

He also provided insights into her family.

“She was from a middle class, light-skinned family. Her mother stopped her from playing with a dark-skinned boy. As with so many light-skinned families, racial prejudice was the norm. Her father was not able to afford university to become a doctor and instead became an accountant, doing external examinations,” Lewis said.

“Although her uncle Dr Ken Evans was the inventor and manufacturer of the coffee-based liqueur Tia Maria, Phyllis’ family, which included an older sister, was not wealthy. She answers the question as to why someone from her family background became a revolutionary in her memoir published in 2019 – Unchained, a Caribbean Woman’s Journey Through Invasion, Incarceration & Liberation.”

BRAINS OF THE OPERATION

Bernard and Phyllis Coard got married in 1967 in England when they were students. She was 24 and he 23. The marriage lasted for 53 years, Lewis said.

Lewis said she had been very ill for over a year before her passing, having suffered a series of strokes and “Bernard took great care of her”.

It has been posited that Phyllis was the brains behind her husband’s power-sharing role in Bishop’s government. Bernard was deputy-prime minister and thought to be the one with the power. Bishop was described as “a wingless bluebird whose wings were clipped by the hardcore members of his party and government. Phyllis was the architect of that. That’s why Grenada hates her so much, and that’s why they treated her so badly,” said a Grenadian who asked not to be named.

Bishop’s NJM and People’s Revolutionary Army (PRA) overthrew the Eric Gairy regime on March 13, 1979. The Grenadian source described Gairy as “a brutal relic of the colonial past, more ruthless than François Duvalier in Haiti.”

According to him, Bishop embraced socialist policies that would empower Grenadians, including empowerment of women and children and islandwide education programmes to increase literacy. He endeared himself to Grenadians with the social programmes, many of which were underway in socialist Cuba and Venezuela a few miles away. Phyllis Coard’s footprint was all over those policies, he said.

“Gairy’s brutality never drew the ire of the United States, but Bishop’s empowerment of Grenadians did,” said the source, adding that “Coard was taking instructions from allies in Jamaica.”

Lewis said Phyllis was a member of the Central Committee of the NJM and co-founder and elected president of the National Women’s Organization of Grenada from 1977 to 1983.

She advanced policies such as free secondary and university education, maternity leave law, women’s cooperatives, equal pay for men and women, and public discussion of the draft national budget for the country.

Lewis believed she was imprisoned because of her marriage to Bernard.

“Phyllis was not on the political bureau, neither was she involved in the military. Her work focused on organising women and implementing programmes that would benefit them. She was imprisoned because she was married to Bernard Coard,” he said.

She was almost 40 years old during the US invasion, recalled Lewis, who also said she was beaten, tortured, suffered sexual harassment and solitary confinement in prison.

However, Gifford said “no Grenadian wanted Bishop to die” but it was believed that Phyllis influenced the action of her husband and others.

He described Bishop as an impressive political character.

“Only Samora Machel (Mozambique) impressed me more than Maurice Bishop. I listened to an address by Bishop in the United Kingdom for about two and half hours. I was totally impressed,” said Gifford, who, along with Jamaican attorney Jacqueline Samuels, went to the defence of some of the accused in the assassination.

According to him, Grenada’s close relationship with Cuba and the then Union of Soviet Socialist Republics (USSR), as well as Bishop’s socialist policies, spooked the USA, as they were happening in the heady days of the frigid political war between the USA, United Kingdom and a communist bloc of nation states. The US, he said, was frightened that an English-speaking island would become a communist state.

Gifford said the defence by Jacqueline Samuels, “then a young, brilliant attorney, fresh out of law school, presented an absolutely stunning defence before the Grenada courts. It is one for law students.” He could not address the courts, as he did not have the authority to practise law in the region.

In recent years, the Coards had been residing in rural Jamaica. Bernard was by his wife’s side when she died.