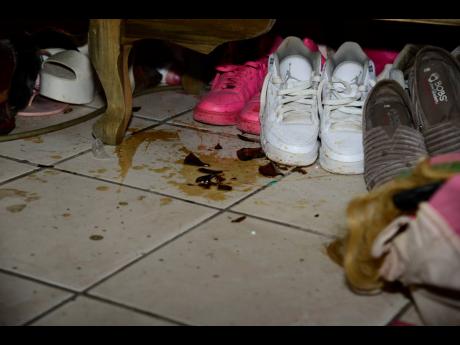 Nicholas Nunes/Photographer
A broken glass bottle tells part of the story of the fracas that ensued as a police team attempted to bring a late-night party to an end in Seaview Gardens, St Andrew, on Wednesday.

Residents of Seaview Gardens in St Andrew are up in arms over the manner in which they say the police went about bringing an end to a party during curfew hours there on Wednesday night. They also blame the cops for a resulting attack in which at least one officer was injured.

Reports are that about 10:30 p.m., more than two hours after the nightly curfew to curtail the spread of the coronavirus had begun, lawmen were on an operation in the area when patrons were seen at a party at a premises. They initially complied with instructions to go home, but when the cops returned to the location at about 11:30, they had returned.

The Glean er was told that when the patrons were instructed to leave, they resisted and started arguing with the cops, telling them to “go look for criminals. Party affi keep”.

Irate at the lawmen’s insistence to wrap up the event, which police said did not have a permit, things escalated with one female patron allegedly attacking a woman sergeant, ripping her uniform.

During the fracas, a missile was hurled from a section of the crowd, hitting a constable in the head. He had to seek emergency medical attention at the Kingston Public Hospital.

Ten persons, including the promoter, were arrested at the scene and another 13 picked up yesterday as cops continue to probe the incident.

Yesterday, residents complained that the police were hostile toward them as they demanded that the event, which was in breach of the Disaster Risk Management Act, come to an end.

The mother of 19-year-old Kevin Clarke, who was among those detained on Wednesday, said she spent the entire night at the Hunts Bay Police Station trying to secure her son’s release as he had a school appointment.

“The police have me a spin me around. They took him out the yard. He was not at the party,” she told The Gleaner. “They said they not gonna allow anyone bail.”

Pointing out that she knew nothing of the stoning incident, she remained adamant that her son was never at the party.

“He was inside someone else’s yard, and they took him and two others out of the yard, and on top of that, I was disrespected and insulted by the officers,” the mother said.

Another resident said that the physical confrontation was provoked by the cops, stating that their attitude of aggression could not foster dialogue.

“Imagine, Usain Bolt had a party, and nobody got locked up, but when poor people do the same, the police draw down and throw people inna jail. That societal double standard is destroying Jamaica,” another commented.

She was referring to a daylight birthday party hosted for the sprint legend late last month, days before he tested positive for the coronavirus. Although the police have said that there was a permit for the event, an investigation is under way into possible breaches of the Disaster Risk Management Act by patrons.