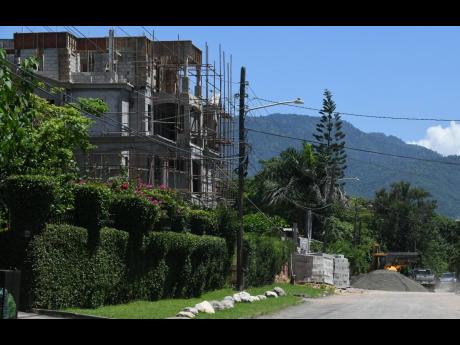 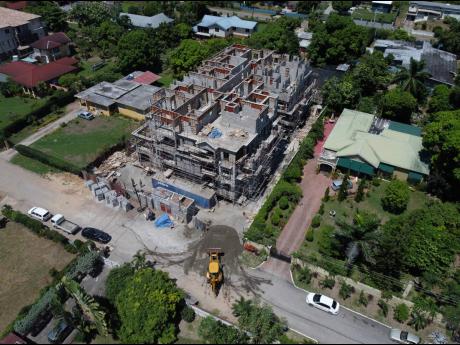 Gladstone Taylor
An aerial view of the construction. 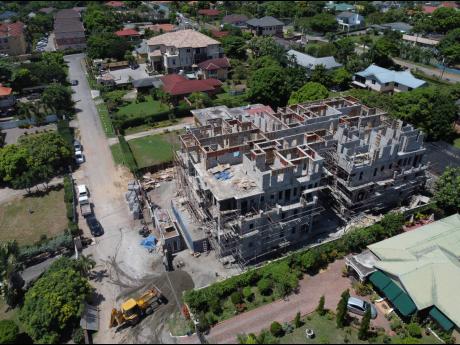 The Kingston and St Andrew Municipal Authority (KSAMC) has issued an order for the developers at 9 Evans Avenue, St Andrew, to halt work on a multifamily dwelling amid a Sunday Gleaner probe which raised potential violations.

The developer, Orpheus Stennett, has also admitted he had been proceeding without court approval to modify the restrictive covenants – a legal contract among residents which preserves their development preferences in the upscale, single-dwelling Kingston 8 residential neighbourhood.

News of the stop order is a temporary victory for the residents of Acadia Citizens’ Association, who have been seeking the intervention of the authorities, including the KSAMC and the National Environment and Planning Agency (NEPA) – the main state regulators in property construction.

The KSAMC said it issued the ‘cease work notice’ last Thursday afternoon, a day before it answered questions from The Sunday Gleaner, first submitted to the authority on September 23, 2020.

“A recent site [visit] revealed that the developer unilaterally modified the unit layout. The developer was advised to correct same in accordance with what was approved,” said Xavier Chevannes, the corporation’s chief engineer, noting that the visit was triggered by this newspaper’s questions.

While not giving specifics on precisely what was observed, Chevannes said common examples of unapproved modifications included the erection of extra walls to allow for more habitable rooms than approved.

Habitable rooms include living room and bedrooms, but exclude bathrooms and kitchens.

In separate responses received on Friday, NEPA said in 2019, it approved construction of a multi-family structure with 18 units in a “three-storey building with a basement” on 1,533.09 square metres (0.37 acres) of land.

The KSAMC, meanwhile, said approval was granted for a “four-storey structure ... complete with basement-level parking”.

Both entities said the development was approved for 28 habitable rooms, well below the maximum 50 rooms allowed per acre in the Manor Park Local Planning Area in which the development falls.

But the residents had expressed concerns in a July letter to NEPA that up to 75 habitable rooms per acre may have been approved.

In the letter, obtained by The Sunday Gleaner, the Acadia Citizens’ Association also raised concerns about the storage of construction material on the public thoroughfare; noise level from steel cutting; work being done outside of permitted hours; and dust emission, among other issues.

For two residents, the construction going ahead of changes to the restrictive covenants seen on the title is egregious.

“It’s just a nightmare,” argued Natalie Murray, a professional health coach who’s lived in the area for more than 30 years. “All of a sudden you’ve gone from your single-family dwelling home environment to these multifamily units and it’s changing the whole nature of the neighbourhood.”

She added, “You have a high rise go up in your backyard, all of a sudden you’ve lost your right to privacy.”

Murray argued that residents were not informed of the changes and insisted that the regulators should be doing more to protect their rights.

“The voices of the citizens need to be heard; the courts need to approve any changes that need to be made. If you’re going change a community and change the legal framework and structure of a community, then that process needs to happen first,” she pointed out.

The issues are not unique to Acadia and have been playing out in several communities across the Corporate Area, as developers seek to cash in on housing demands but must hurdle contracts residents have in place to protect the ‘character’ of their neighbourhoods.

Earlier this year, the Supreme Court ordered the demolition of town houses and apartments constructed at a cost of more than $100 million on Upper Montrose Road in the Golden Triangle for breach of restrictive covenants.

“We’re literally being forced out of our homes,” lamented Maureen Webber, who said her parents moved to the community decades ago to avoid a similar situation elsewhere.

“I don’t have time to move again. They cannot be allowing four-storey or three-storey complexes in a single-family residential area.”

Another chief concern for Webber is the financial strain that comes with hiring lawyers to challenge the development.

“Most of the people in the community are retirees. Where will they find the resources or the money or the connections to begin to appeal?” she asked.

The residents’ contention that they were not informed has been rejected by Stennett’s attorney, Cardena Clarke, who said her client has “communicated regularly” with them.

The site has been visited by NEPA and the KSAMC and “we have never been issued any caution as it relates to our habitable rooms”, she said. “We are within plan; we are on plan.”

On the issues of the dust, working hours, material blocking the roadway and the habitable rooms, Clarke said the developer has followed all the guidelines.

“Everything seems to be on the up-and-up,” she said.

The Sunday Gleaner visited the site on September 25 and observed some of the work, including the removal of material from the roadway.

The lawyer has insisted that Stennett is operating within the conditions of the approvals and that the character of Acadia has changed, which supports his development.

She said Stennett owns another property at 3 Evans Avenue, which is now a multifamily structure, proving that “the nature and characteristics of the neighbourhood has changed already”.

While the KSAMC has said it’s not satisfied with the development’s adherence to approvals, NEPA has revealed a slightly different story.

The agency said that although its last inspection on September 10 showed that the development was “generally compliant” with the environmental permits, it had reason in the past to serve three notices, including one with an intention to suspend the permits.

The breaches, which it did not outline, have “since been remedied”, it said.

A bigger problem now faces the developer, as to date, it is yet to get permission from the Supreme Court to modify the covenants based on an application filed in 2018.

“We’re far advanced, yes,” Clarke initially said in response to a question about whether Stennett had met requirements of the court for, among other things, notifying residents of his intention and posting notices in Acadia.

Pressed on what remains outstanding, the lawyer said: “It is going to be difficult to answer that question” although she subsequently said all the requirements have been met.

“Along the way, the court would have to know what the authorities are saying about the development. And the authorities have been making regular visits to the site. KSAMC was there this week and NEPA was there last week,” said Clarke last Thursday evening, in noting that she inherited the case in 2019 after the previous lawyer died.

Should the development have gone ahead without the court approval?

“It is not just the court that would have a vested interest and it would be inaccurate to say that. The authorities, of course, would have a watchful eye on the property and will ensure that regular visits are paid to the site to ensure that things are being done within the plans and the law,” Clarke replied.

The KSAMC argued that it has a duty to issue approvals, even if covenant modifications are not settled.

“A restrictive covenant being a right vis-à-vis private parties is not a planning criterion,” the municipality said, noting that it usually includes a statement that its permission “does not dispense with the duty to have restrictive covenants modified and amended”.

The corporation said it is for the developer “to decide” when to apply for changes to covenants because “to dictate a timeline” or deny approvals for likely breaches “would be for the KSAMC to breach its statutory duty and expose itself to various forms of legal challenges”.

NEPA, meanwhile said enforcement of the covenants “is a contractual matter between neighbours” although “it takes care to notify applicants that the due diligence must be done to satisfy other statutory obligations”.

“It’s not that they are against development ... the citizens are not getting the opportunity to have their say and this is very, very, very serious.”

Though acknowledging that growth and settlement patterns are changing in Jamaica, Professor Archer is insisting that developments must be bolstered by a modern spatial plan.

Urban Renewal and Housing Minister Pearnel Charles Jr said comments from a technical working group on a draft plan are being reviewed with a view for completion by October 31 before submission to Cabinet for approval.

The existing plan is 42 years old.