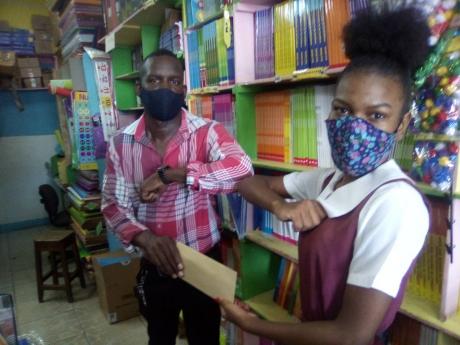 Seventeen-year-old Glenmuir High School student Rayonna Knight was all smiles as she knocked elbows with businessman Wayne Henry while receiving a cheque valued over $22,000 in Old Harbour, St Catherine.

“I am very thankful for this assistance that will help my mother to send me to sixth form. I know that time is tough, and having helped me to acquire eight CSEC subjects, then Mr Henry’s contribution can only sweeten the efforts,” Knight said.

Meanwhile, Knight said that the donation means a great deal to her, as having received assistance from another source, she would have needed to pay $20,000 for additional material.

“We are in the coronavirus time, so the school environment needs all the assistance it can get for adjustment, and the business community continues to help through persons like Mr Henry. I am really thankful,” Knight said.

Knight was successful in nine CSEC subjects in 2020, she told The Gleaner. She attained twos in geography, mathematics, information technology, technical drawing, building and furniture, principles of business and principles of account, plus one in English and a three in English B.

The Church Pen resident said that she is yet to select a career choice, but sees teaching as a possibility; however, she is trying to do well in sixth form to move herself into higher education.

“I really thank him. I know that this donation will help my daughter in many ways towards her schooling,” Ionie Buchanan said.

MORE SUPPORT TO GIVE

Meanwhile, Henry said that his aim is to give help to someone who has the talent and achievement, but requires help to maximise their potential.

“I was made aware of Miss Knight’s situation and I decided to help in the best way possible. I know that many persons, like myself, were deprived of a sound education, as there was no money, so this is my way to assist even one person,” Henry said.

During the handover at the Old Harbour Books and Stationery, another student, Shawntol Nembhard of Old Harbour High, got a package of books paid for by Henry.

It was revealed that others have benefited from donations, and Henry promised to help others as the need arises.