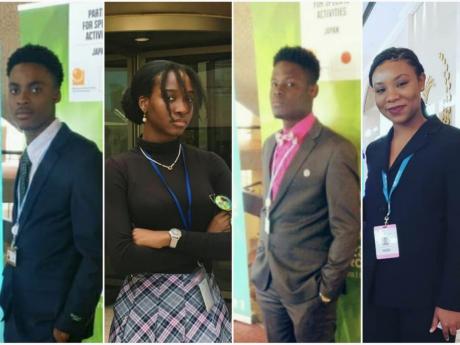 A four-member team of students of the University of Technology, Jamaica (UTech) has made it through to the finals of the 2020 IBM Developer Call for Code Global Challenge, University Edition.

The challenge pushes students to use artificial intelligence and data to come up with global solutions to fight climate change and COVID-19.

Plant-It is aimed at helping to push back against climate change by providing a solution that helps citizens grow their own food.

The capabilities of Plant-It range from receiving seedlings to designing garden spaces on a smartphone and an auction system to sell food in local communities.

Acting UTech president, Professor Colin Gyles, said that the placement of the students in the finals highlights the university as a creator of innovators and entrepreneurs.

"The students developed an innovation that allows householders to be involved in producing food crops at home to solve part of the problem of transporting foods stuff and the challenges of using plastics and so on. They seek to solve part of the global food security challenge while maintaining a healthy environment and minimising the carbon footprint caused by the transportation of food over long distances. We are proud of them for their successes.

"We are pleased that they have taken this training beyond the walls of the university and into the wider society and into the international space. This is very big for UTech because it shows that right here in Jamaica at UTech we are able to think globally, while acting locally, to solve problems that can be applied further afield in helping to strengthen the economic base of countries while responding to global challenges," he said, sharing that UTech is proud to have them as part of their Sagicor Innovation Lab.

Gentles said he is honoured to be part of a unit that is keeping Jamaica "on the map", adding that the achievement demonstrates that UTech can compete against the most prestigious universities across the globe.

Over 4,000 universities entered the competition.

"They had quite a few interesting judges for the competition. Bill Clinton, former president of the United States, was one of the judges. It is an honour to know that people who have made waves in society and who have established themselves can look at these solutions we students have made and see value in it and believe that it should be placed at the top."

Success is no stranger to the members of the team.

In 2018, Gentles alongside Thompson and Brown entered a United Nations (UN) sponsored global hackathon and in 2019, they were inducted as UN youth experts on technology and agriculture.

Pinnock, the fourth member of the team, is a climate change and sustainable development advocate who has done work with the Clinton Global Initiative.